Earthstone Energy Inc. is continuing its Permian Basin acquisition spree with plans to purchase the assets of privately held Titus Oil & Gas Production LLC in the New Mexico portion of the Permian Basin in a $627 million cash-and-stock deal. 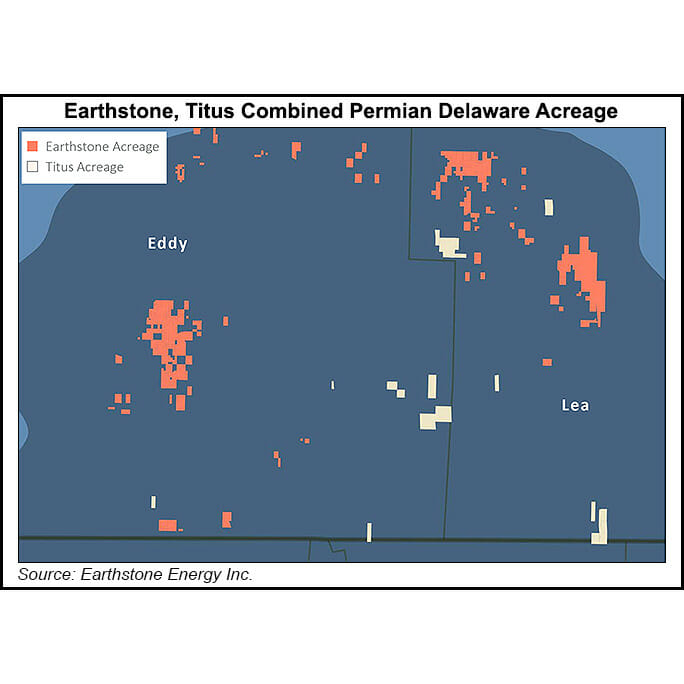 Located in the northern portion of the Delaware sub-basin, the assets produced 31,800 boe/d (65% oil, 83% liquids) on a net basis during June.

Following the Titus deal, expected to close in the third quarter, Earthstone expects its fourth-quarter net production to rise by 18,000-23,000 boe/d (65% oil).

“The Titus Acquisition continues our path of building scale in the Permian Basin, increasing our daily production to around 100,000 boe/d upon closing,” said Earthstone’s Robert Anderson, CEO. “We had a goal of adding to our recently established Northern Delaware Basin position and are excited about this transaction and the drilling inventory we are acquiring as it is among the highest economic locations in the Permian Basin.”

He added, “We continue to pursue synergies from the two acquisitions completed since the beginning of 2022. In particular, we are very pleased with the execution of our operations in the Northern Delaware Basin assets acquired earlier this year and expect to apply that knowledge to the Titus Acquisition assets after closing. We have continued to build out our high margin asset base, which is generating significant free cash flow to which this acquisition will contribute in a meaningful way.”

Earthstone said it expects to maintain two rigs in the Delaware and two in the Midland sub-basin after the closing, with an additional Delaware rig under consideration.

Earthstone added that it is now forecasting a $25-50 million increase in fourth quarter capital expenditures.

The transaction expands Earthstone’s Delaware acreage position to around 44,000 net acres, and its broader Permian footprint to about 256,000 net acres.

The $627 million price tag consists of about $575 million in cash and about 3.9 million shares of Earthstone’s Class A common stock valued at $52 million.

Anderson called the price “highly attractive,” noting, “We are also obtaining six wells in progress and 86 potentially highly economic net locations which will be incorporated into our drilling plans as quickly as possible. The combination of the attractive price being paid, the current high level of commodity prices and production of the acquired assets will allow us to acquire the assets utilizing primarily debt funding while having only a minimal impact on leverage.”