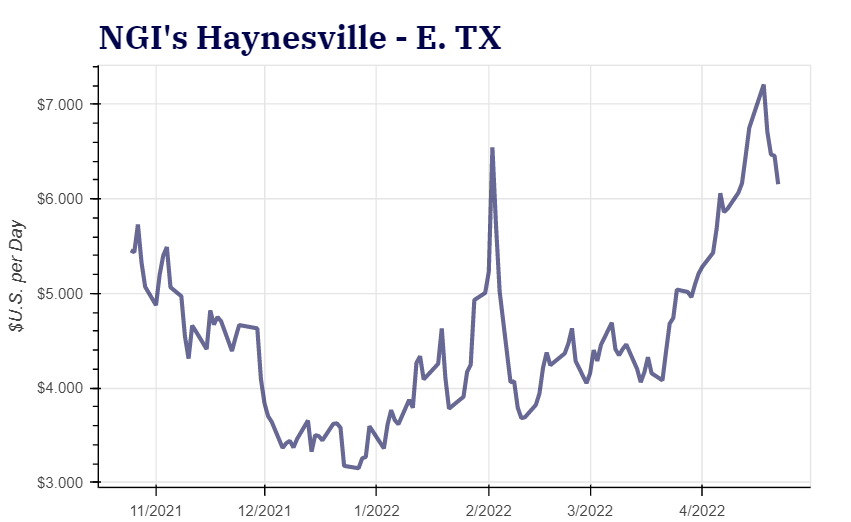 As the first quarter E&P earning season gets in full swing over the coming weeks, markets are expected to focus on whether companies are able to ramp up natural gas and oil production to capitalize on surging prices without overshooting and bringing on excess supply.

Natural gas futures eclipsed the $8 threshold earlier this month, marking a 13-year high. That is particularly notable given that prices often moderate during the spring, when neither domestic heating nor cooling demand is exceptionally strong.

At the same time, oil prices have soared this year. West Texas Intermediate crude prices, the U.S. benchmark, have hovered above $100/bbl in recent days, up nearly 40% from the start of the year.

“It doesn’t happen overnight, but I do think you are going to see more production – oil and gas – to meet the supply/demand imbalance that these high prices clearly reflect,” Samco Capital Markets’ Jacob Thompson, managing director, told NGI.

However, E&Ps are grappling with severe inflationary pressures – from lofty input expenses to labor shortages that are driving up staffing costs, Thompson said. U.S. inflation surged to a 40-year peak during the first quarter, reflecting lingering supply problems caused by the pandemic, pent-up demand and new problems caused by the war in Ukraine.

These challenges make it difficult to begin projects or expand others. This is particularly true on the oil side of the equation, which affects output of associated natural gas. Spring maintenance projects also have hindered gas production.

What’s more, producers face ongoing pressure to divert investments away from fossil fuels and toward renewable sources of energy. This intensified when President Biden took office in early 2021, with ambitions for the country to reach net-zero carbon emissions by 2050. Institutional investors have amplified these calls for change, while also pressing oil and gas companies to step up dividend payments and stock buybacks.

The cumulative result on the 2022 direction of production is not yet clear. That makes the coming earnings season a potentially revealing one – less so about first quarter results and more the outlook from E&P executives on what lies ahead the rest of this year.

“Amid the uncertainty lies opportunity, in our view, and we look to 1Q2022 updates to get a better handle on how E&P operators are viewing their own opportunity set, and the outlook for shale” through this year and next, the Wells Fargo team said.

However, he added, the sky-high oil and gas prices “would normally suggest a stronger increase in activity.” He noted “the combination of E&P capital discipline and industry shortages in labor and equipment” could this year keep “incremental increases more moderate in nature.”

U.S. natural gas production has recently hovered above 95 Bcf/d. That is up from lows around 92 Bcf/d earlier this year amid winter weather-imposed delays but below 2021 highs near 97 Bcf/d.

Demand has proven robust so far in 2022, with chilly conditions lasting longer than normal in the North and record calls for U.S. exports of liquefied natural gas (LNG). Consumption of LNG was strong through the winter amid light storage supplies in Europe and parts of Asia. When the Kremlin launched its war in Ukraine in February, it triggered another heaping dose of demand for American gas.

Europe depends on Russia for roughly a third of its gas. But countries across the continent have vowed to wean themselves from Russian supplies, a move that necessitates more LNG to ensure adequate gas in storage ahead of next winter.

That marked a 100,000 b/d increase from the prior week and a notable bump from the level maintained through much of the first quarter, when output had held around 11.6 million b/d through most of February and March.

However, there is plenty of runway ahead, analysts say. Production is still more than 1 million b/d below pre-pandemic highs and global supplies are under festering threats from the war’s fallout.

The United States banned imports of Russia energy and other Western countries joined the Biden administration in a series of economic sanctions against the Kremlin. This wounded Russia’s energy complex and curtailed its ability to export crude. More than 1 million b/d of Russian oil was pulled from global supplies.

As the Ukraine war drags on, European Union members (EU) are currently taking steps to reduce dependence on Russian oil. Germany, the largest economic power in the bloc, vowed to cease Russian imports by year-end.

Should all of the EU countries follow suit, the supply/demand dynamic could shift substantially, according to Rystad Energy. “It is estimated that up to 2 million b/d of Russian crude production may be lost if the EU bans Russian oil,” said the firm’s Claudio Galimberti, senior vice president of analysis.

Against that backdrop, analysts said first quarter results may disappoint, given the slow build-up in output amid inflationary headwinds. The rest of 2022, though, could prove particularly prosperous for American E&Ps — if demand and prices hold steady and producers capitalize.

First quarter earnings “may underwhelm due to a shortage of sand, trucking, pipes, Tier 1 equipment and a skilled labor pool,” Evercore ISI’s James West said. Still,  for those companies that can clear inflation hurdles, a potential “multi-year upcycle” lies ahead.