Reflecting a spectrum of blue and orange temperature projections on weather maps at this early juncture in the season, natural gas forwards trading was mixed during the Nov. 23-Dec. 1 trading period. Strong gains for western markets countered declines throughout much of the eastern two-thirds of the Lower 48, NGI’s Forward Look data show. 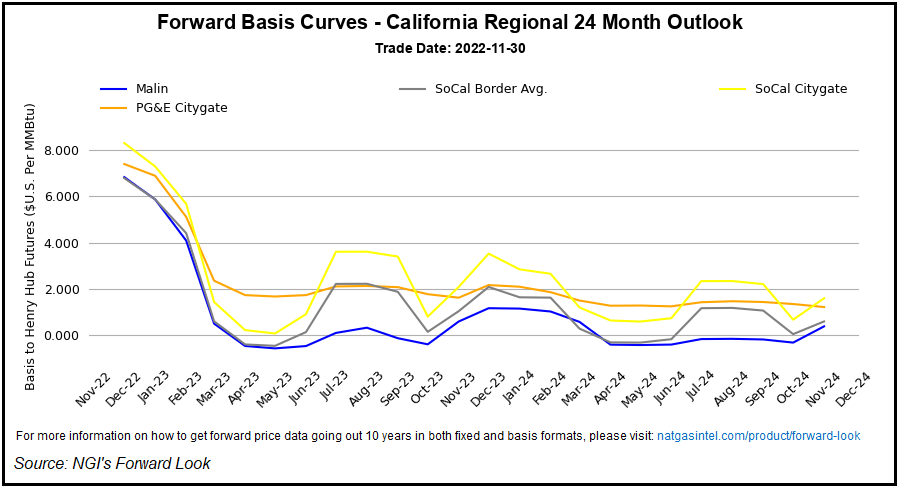 This comes as the Energy Information Administration’s (EIA) latest inventory data showed storage in the Pacific and Mountain regions notably lagging historical norms. Pacific region storage stood at 226 Bcf as of Nov. 25, a 21.5% deficit to the prior five-year average. Mountain region stockpiles stood at 197 Bcf, or 5.3% below the five-year average.

Recent forecasting from Maxar’s Weather Desk generally pointed to chillier conditions along much of the West Coast and the northern Lower 48 through the first half of December, with more seasonal to warmer-than-normal temperatures elsewhere.

For next week, the forecaster called for a “boundary between unseasonably cold air to the North and above to much above normal temperatures in the South.” The Lower 48’s Northern Tier was expected to continue seeing below-normal temperatures for the Dec. 10-14 timeframe, according to Maxar.

On the East Coast, a few New England and Mid-Atlantic hubs saw gains during the period, adding to already hefty premiums. Algonquin Citygate January basis rose 56.5 cents to end at plus-$29.528, while Cove Point front month basis jumped 52.3 cents to plus-$10.978.

Meanwhile, numerous locations saw fixed price discounts of around 40-60 cents week/week, paced by a 46.6-cent decline in January Henry Hub prices, which ended the period at $6.945.

January Nymex futures conceded ground throughout the Nov. 23-Dec. 1 period after rallying into the Thanksgiving holiday. The December contract sold off 31.2 cents into expiry in Monday’s session. January tumbled 30.5 cents on Wednesday before dropping another 19.2 cents on Thursday to settle at $6.738.

Friday’s trading brought further heavy selling for the front month, with January tumbling another 45.7 cents to $6.281.

Futures receded during the Nov. 23-Dec. 1 period as forecasts for the first half of December failed to offer the kind of widespread cold needed to inspire bullish sentiment.

The latest weather data from the American model was warmer-trending Thursday, showing less cold air advancing from Canada into the United States from next Wednesday through Dec. 10, according to NatGasWeather.

Recent data from the European model, meanwhile, offered a colder outlook for the second week of December, the firm said.

“It’s worth noting the weather models” at one point “teased a frosty U.S. pattern” for the first week of December “only to back off considerably,” NatGasWeather said. “…The Dec. 8-15 pattern is likely viewed as just cold enough by most major players, but for full-fledged bullish weather sentiment, more ominous and persistent cold will be required.”

There are potential bullish catalysts on the horizon, including a possibly frigid back half of December and an anticipated return to service for the Freeport LNG terminal, according to EBW Analytics Group.

“With natural gas on the price-inelastic portion of the demand curve, prices could run steeply higher in a bullish scenario,” Rubin added. “This setup, while unlikely, is contributing to enduring Nymex winter risk premiums and the reluctance of traders to short natural gas — enabling prices to trade above our assessment of fundamental fair value.”

At this point in the season, U.S. storage inventories appear adequate, but there’s no room for complacency given weather, which is the “ultimate unknown factor,” Rystad Energy analyst Ade Allen said in a recent note.

Alongside rising residential/commercial demand with the onset of winter heating, “the other big demand factor is the restart of Freeport LNG,” Allen said. “Recent communication from the operator points toward a restart in December, but market hawks remain skeptical. Facility construction and rehabilitation have been slowed by regulatory hurdles that make estimating a restart timeline nearly impossible.”

Rystad’s estimates put the Texas export facility on track for a partial restart by mid-January, with 85% utilization (2.0 Bcf/d) by the end of January, according to the analyst. Full utilization of 2.38 Bcf/d would follow by March 2023 under the firm’s modeling, Allen said.

“Should this restart timeline be verified, it would provide bullish sentiment and an upward trajectory for prices in the first quarter, a period that historically has been prone to supply disruptions due to winter weather impacts,” the analyst added.

Among the notable regional basis shifts during the Nov. 23-Dec. 1 period, production hubs in West Texas appeared to see a boost from the stronger pricing downstream in the western Lower 48.

NOVA/AECO C added 23.4 cents for January, though the hub continued to trade at a sizable $2.182 discount to Henry, Forward Look data show.