Year-over-year oil/natural gas production declines in the Lone Star State are expected to take hold and gather pace during the year, an industry economist said in Houston Tuesday. But recovery is still far off, with pain enough left for everyone in the meantime. When there is a recovery, crude oil will see it first, he said. 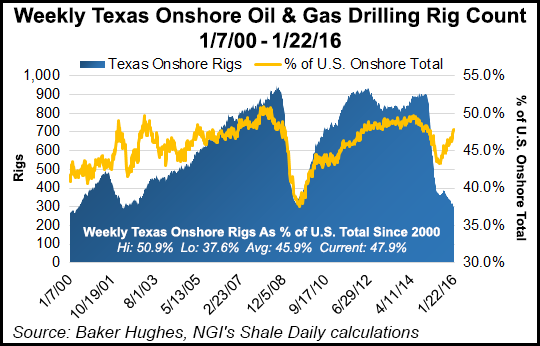 What about earlier predictions of a recovery during the second half of 2015, for instance? Those prognosticators “missed it by a country freaking mile,” economist and Texas Petro Index (TPI) creator Karr Ingham told reporters at Petroleum Club Houston, where talk overheard in the elevator was about hard times in the West Texas energy patch.

The recovery — whenever it comes — will be led by crude oil, not natural gas, Ingham said.

“I’m probably more optimistic about oil because gas has shown no prospects of recovery over the last few years,” he said. “A sort of change in the dynamics of our energy economy and transportation economy could alter that scenario, but that would take place over a long period of years.

“We’ve certainly got a tremendous amount of excess gas production capability out there. [Producers have] been at it long enough now that the gas-producing guys in all regions of the country — northeast in the Marcellus in particular — are just able to ratchet their costs down and produce natural gas at a lower cost than we went into this shale thing able to do. So it doesn’t look to me like the prospects for natural gas recovery are out there anytime soon, I mean meaningful natural gas recovery.”

Ingham’s regular presentation of monthly TPI data was the most dour yet of the current downturn and included a review of 2015, that annus horribilis.

Texas wells yielded an estimated 1.27 billion bbl of crude oil last year, according to the TPI, defying severe curtailments of permitting, drilling, and completions by producers all over the state in response to crude oil prices that at year-end 2015 were down by as much as 70% since mid-2014.

Compared to peak levels established in 2014, the rig count is now down by 68%, drilling permits are off 70%, and oil and gas well completions have each declined by about 60%.

Despite this, the price of crude oil continues to languish in the $30/bbl area (or lower) because the anticipated decline in Texas, U.S., and North American crude oil production has failed to materialize. The TPI estimates crude production in Texas in 2015 outpaced the 2014 total by 11.5% — 1.267 billion in 2015 to 1.136 billion bbl in 2014. Statewide, crude output in each month of 2015 exceeded output in the same month a year earlier, although the margin of year-over-year growth decreased from about 24% in March to 1.9% in December.

As 2016 begins, Ingham said he sees a global market glutted with supply — crude production at unexpectedly elevated levels, large volumes of crude in storage, and the imminent return of Iranian oil to the marketplace. “At this point,” he said, “it seems quite safe to assume the Texas Petro Index will remain in decline for at least the first half of 2016 and perhaps most of the year.”

While global oil supplies are likely to continue exceeding demand in 2016, Ingham said prospects for a recovery of oil markets are better this year than in 2015. The first sign of recovery will be significant production decline in Texas and the United States. “The pace of production decline in Texas and the U.S. should accelerate in 2016, and when that begins to occur we should start watching for crude oil in storage in the U.S. to decline on a real and sustained basis, not just seasonally,” Ingham said.

“In the big picture, crude supplies continue to outpace global demand, and the unfortunate likely outcome is relatively low prices in 2016,” he said. “But that doesn’t mean prices can’t be higher than they are right now, and at this point some measure — any measure — of price increase would help to stop the bleeding.”

The upstream oil and gas business environment in Texas has worsened even since year-end, Ingham said. Prices have declined yet further, falling to a daily posted price of $23.25/bbl on Jan. 20 before pulling back from the $20/bbl cliff late last week. The statewide rig count fell below 300 last Friday for the first time since March-April of 2000 (see Shale Daily, Jan. 22). “We’ve not begun the year moving in the right direction, and the continued deterioration of market conditions likely signals additional industry downsizing and job loss in the coming months,” he said.

During December, Texas crude oil production totaled an estimated 107.8 million bbl, 1.9% more than in December 2014. The value of Texas-produced crude oil totaled more than $3.64 billion, 38.0% less than in December 2014, according to Ingham. Estimated Texas natural gas output was nearly 750.5 Bcf, a year-over-year monthly decline of about 0.5%. With natural gas prices in December averaging $1.91/Mcf, the value of Texas-produced gas declined 42.4% to about $1.43 billion.