After some intraday volatility amid thin pre-holiday trading, natural gas futures shot higher midweek on the increasing likelihood that frigid air would finally descend into vast stretches of the United States. The January Nymex gas futures contract soared 10.7 cents to settle at $3.976 on Wednesday. The prompt month has gained 28.6 cents over the past three sessions. 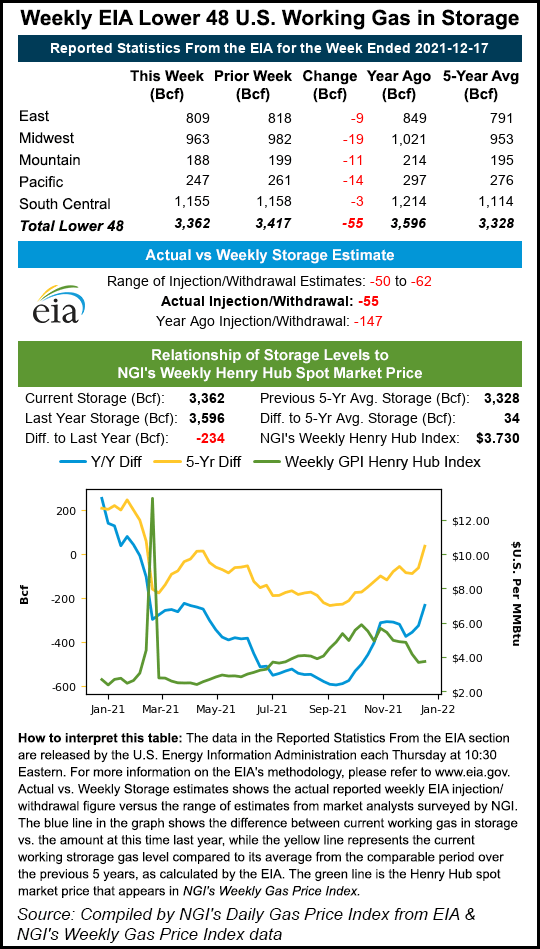 Spot gas prices were mixed as chilly weather remains in the West and northern Plains while the rest of the country is forecast to see a continuation of mild conditions. NGI’s Spot Gas National Avg. jumped 40.0 cents to $5.150.

With temperatures expected to set record highs in some places over the next week or so, the prospects of colder weather have been a tease for natural gas bulls that have been repeatedly knocked down in recent weeks by the balmy December pattern. Though there are still discrepancies between the weather models, even the warmer Global Forecast System forecasts the frosty air spreading out of the northern Plains across the northern part of the country Jan. 1-5.

NatGasWeather said the European Centre (EC) model is much colder with the upcoming blast. A slight shift north/south with the bitterly cold pool over South Canada during the period could result in a huge price response. “To our view, it’s important the EC doesn’t back off on cold Jan. 1-5, or it could disappoint.”

Bespoke Weather Services said the risk of at least some of the stronger cold up in Canada spreading farther east still exists. Patterns in tropical forcing mechanisms are still supportive of colder weather into early January, according to the forecaster. At the same time, the upcoming pattern could bring enough cold into the Rockies/Plains to warrant freeze-off concerns.

“Nothing like last February, mind you, as there is no super cold plunge into Texas, but could still be notable,” Bespoke said.

All things considered, the forecaster sees upside risks to prices, even after the rallying of the last couple of days. This could take place if not the rest of this week, then certainly into next week’s contract expiration, especially if colder risks hold on or get stronger as the pattern in the first half of January becomes clearer.

“Obviously, a big flip back warm would invalidate this idea, but that is not something we favor as of right now,” Bespoke said.

Meanwhile, near-record export demand continues as Sabine Pass ramps up its sixth production unit. NGI data showed feed gas volumes slightly above 13 Bcf on Wednesday, a level they have more or less held at since Sunday.

EBW Analytics Group noted that the Sabine Pass terminal – which took in 5.2 Bcf/d of deliveries on both Tuesday and Wednesday – has a daily natural gas demand that is 58 times the magnitude of a 500 MW combined-cycle facility. Furthermore, LNG demand could still edge 0.2-0.4 Bcf/d higher with Corpus Christi, Cameron, Freeport and Elba Island demand all slightly off prior highs.

“The next notable leg higher, however, will likely require the ramp of Calcasieu Pass,” said EBW senior analyst Eli Rubin.

The new U.S. LNG capacity comes amid the ongoing energy crisis in Europe, which has resulted in record prices for the super-chilled fuel. The February Title Transfer Facility contract has rocketed close to $60 this week, with forecasts pointing to colder-than-normal temperatures lasting through the end of the year, along with a considerable amount of snowfall.

Shipbroker Fearnleys AS said while stockpiling in North Asia has currently left the region well supplied, European gas storage is at around 60% capacity compared with a five-year average of 76% for this time of year. In response, traders are redirecting cargoes West.

As a result, freight levels have taken a steep dive as multiple portfolio players foresee increased idle time and envisage strong competition in a market that is low on firm requirement. The problem could be exacerbated by the “potentially very costly” daily boil-off when needing to keep vessels cold.

Supply-demand balances looked more balanced midweek, according to Fearnleys. However, “with the West-to-East conveyor belt drying up as vessels remain in the Atlantic or reposition West, freight levels may be forced higher especially if Asian demand starts to pick up again, as usual at this time of year,” it said.

In the meantime, Thursday’s government storage report may further the advance for U.S. prices, or potentially halt the rally. Ahead of the Energy Information Administration’s (EIA) report, analysts were banking on a much smaller-than-normal withdrawal from underground storage.

A year earlier, utilities withdrew 147 Bcf from storage, while the five-year average is a 153 Bcf reduction in supplies, according to EIA.

EIA reported an 88 Bcf withdrawal from inventories for the week ended Dec. 10. That left total working gas in storage at 3,417 Bcf, which was 326 Bcf below year-earlier levels and 64 Bcf below the five-year average.

EBW said the long-held storage deficit versus the five-year average should flip to a surplus with Thursday’s EIA report, and is likely to expand through the last week of December. However, the early-January cold spell is likely to quickly reverse inventories back to a sizable deficit versus five-year normals before the end of the month.

“Nonetheless, the absence of a significant threat to winter supply adequacy suggests that a near-term bump in pricing may ease as the January cold outbreak recedes,” EBW’s Rubin said. He pointed out that forecaster DTN’s current late-January and February forecasts are relatively mild, “paving the way for renewed downward pressure on Nymex natural gas futures in mid-to-late winter.”

Spot gas prices were mixed on Wednesday as most of the country is expected to see quite mild weather through the remainder of the week.

Texas cash prices were mostly lower as the chilly air that accompanied the Winter Solstice began moving out of the state, ushering in more springlike temperatures. After stalling out in the 50s earlier in the week, daytime highs are expected to reach the 70s on Thursday and then the 80s by Friday, where they are set to remain through Dec. 31.

Small gains were seen in the Midwest and Midcontinent, although Parkway/Union cash posted a more substantial 16.0-cent increase to $3.965.

Over in the Rockies, Kingsgate spot gas prices shot up $2.520 day/day to average $7.775 for Thursday’s gas delivery.

The steep hike occurred even as Westcoast Energy said it safely returned the third subsection of the 30-inch diameter 8AL1 pipeline to service. This increased the Huntingdon Delivery Area operating capacity to nearly 1,907 MMcf/d starting Dec. 21.

“This represents an increase of roughly 180 MMcf/d from its previous capacity restriction of 1,727 MMcf/d,” said Wood Mackenzie analyst Quinn Schulz.

The previously isolated pipeline segment is located northeast of the Sumas interconnect and since Nov. 16 has operated under limited capacity because of a pipeline assessment following the Coquihalla flooding in southern British Columbia. Since the isolation of the pipeline, actual cuts to flows were roughly 436 MMcf/d with one subsection in service and 155 MMcf/d with two subsections in service relative to pre-flood flows, according to Wood Mackenzie.

“The majority of the cuts observed since the flooding was during the period where two of the three subsections were active,” Schulz said.

Further downstream in California, Malin spot gas prices jumped $1.805 to average $8.105 for Thursday’s gas day as the National Weather Service said moderate to locally heavy rainfall is likely through Friday for the lower elevations of the West, while heavy snowfall is expected to expand into the Sierra and Central Rockies Thursday and Christmas Eve.

The forecaster also called for light snow and gusty winds for the Northeast for the remainder of the week. With pipeline capacity maxed out in the region, Algonquin Citygate next-day gas spiked $4.455 to average $14.580 for Thursday’s delivery. The highest price in the region came in at $18.750.