A resurging pandemic and potentially protracted negotiations over a new round of economic stimulus could dominate the early months of President-elect Joseph R. Biden’s tenure, overshading other priorities and likely delaying any new major legislation impacting oil and gas interests. 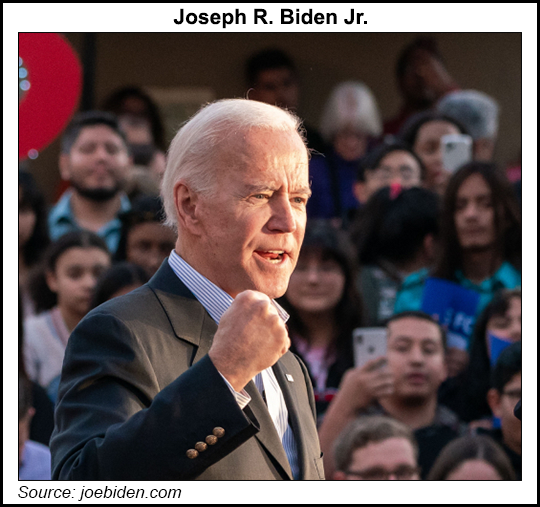 The likelihood of a divided government, moreover, will make Biden’s energy and climate priorities among his heaviest lifts, analysts said. Republicans are poised to retain control of the Senate with GOP candidates favored in two pending run-off elections in Georgia that would determine the upper chamber’s majority. Biden’s political opposition has made clear it would oppose big shifts in policy that would diminish demand for U.S. natural gas and crude oil.

“The fact that Republicans appear to have retained Senate control will make it difficult if not impossible” for Biden “to enact his major climate reforms,” said Raymond James energy analysts led by Pavel Molchanov.

Immediate crises and efforts to address them stand first in line, though, and may do the most to obscure work on long-term ambitions in 2021, analysts said. Biden faces an intensifying challenge in addressing the pandemic.

News this week of a potential vaccine rollout before year’s end buoyed long-view markets, but it did little to ease worries about near-term threats.

“The fast-tracking” of a vaccine “doesn’t mitigate the risk that many U.S. states will have to return to some form of lockdown this autumn/winter,” said Rystad Energy analyst Bjornar Tonhaugen. He noted it may take several months, perhaps longer, to immunize the entire country and end the pandemic. “Immunity doesn’t arrive the day the vaccine is released.”

Dr. Anthony Fauci, the nation’s top infectious-disease expert, has said much of the public may not be vaccinated until mid-2021.

Though Trump has not conceded the election and is pursuing legal challenges in states where vote totals are particularly close, Biden holds a substantial lead overall. This week, he delivered a formal victory acceptance speech in which he discussed climate change and racial equity as key priorities. He also emphasized the urgency of addressing ballooning coronavirus cases and the pandemic’s potential to inflict further damage to the U.S. economy.

The number of Americans hospitalized with Covid-19 infections on Tuesday reached a record 61,964, according to the Covid Tracking Project. Virus cases are spiking in 43 states. Over the past week, the United States averaged nearly 109,000 new cases a day, more than any week prior.

Rapid virus spread is forcing school closures, event cancellations and slowing overall economic activity in several states. This comes when the country is recovering from the pandemic’s initial shocks but still has yet to gain back about 10 million of the 22 million jobs lost since March, when outbreaks began.

Against that backdrop, Democrats in Congress have called for a new stimulus package that could cost up to $2 trillion to bolster unemployment benefits, deliver small business assistance and provide a second round of direct government payments to American households. Republicans have countered with a roughly $500 billion plan.

Trump, however, has backed away from discussions post-election, focusing instead on challenging election results.

“The simple fact is this election is far from over,” Trump said after the Associated Press called the race for Biden.

This leaves analysts to focus on the gap between the two parties’ stimulus plans and to increasingly anticipate that any new legislation would have to wait for Biden’s move into the White House on Jan. 20, when new partisan battles likely await.

“I will spare no effort — or commitment — to turn this pandemic around,” Biden said.

A long political slog – and one that distracts from other Biden priorities, including climate policies – lies ahead, analysts said.

“The Trump Administration and its Congressional Republican allies seem to have coalesced around defiance and delay rather than concession and reconciliation, and post-election acrimony appears poised to gather momentum in coming weeks,” said analysts at Clearview Energy Partners LLC.

“If this political trajectory continues – and we see little reason to expect otherwise – it could be an ill portent for bipartisanship next year.”

To be sure, Biden can use his executive authority to move swiftly on key fronts. He can order the United States back into the United Nations climate accord, widely known as the Paris agreement, and cease or at least slow oil and gas leasing on federal lands – both of which the Democrat has vowed to do.

He could also cool trade tensions with China that have simmered for much of Trump’s term in the White House. Energy interests, including the American Petroleum Institute (API), have publicly extended olive branches to Biden on this front, saying eased relations with the world’s second-largest economy could clear a path for increased U.S. liquefied natural gas exports to China.

“During this unprecedented year of public health and economic crises, we need policies that keep household energy costs low and protect and grow the more than 10 million skilled U.S. jobs supported by our industry,” API CEO Mike Sommers said.

However, Biden’s biggest aspirations would require new U.S. taxpayer support and, by extension, legislation that Republicans in the Senate – backed by energy lobbyists — are all but sure to block. Namely, Biden’s call for increased corporate tax rates and a $2 trillion infrastructure and clean energy plan to address climate change would need Congress’ approval.

GOP opposition in the Senate would, at a minimum, delay many domestic oil and gas companies’ worst fears — new tax burdens and a hastened transition from fossil fuels to renewable sources of energy that Biden says are critical to combat the adverse effects of climate change. Biden campaigned on promises to put the United States on a path to a carbon-free power sector by 2035 and a carbon-neutral economy by 2050.

In his victory speech, meanwhile, Biden urged unity but conceded political rancor and discord over how to address a spiraling pandemic.

“We cannot repair the economy, restore our vitality…until we get this virus under control,” he said.

“Let this grim era of demonization in America begin to end — here and now,” Biden added. “The refusal of Democrats and Republicans to cooperate with one another is not due to some mysterious force beyond our control.”