Eagle LNG Partners LLC and its partner have selected Wärtsilä Corp. to develop a power plant in the Caribbean nation of Antigua and Barbuda that would be integrated with a liquefied natural gas (LNG) terminal in what could be a model for the region. 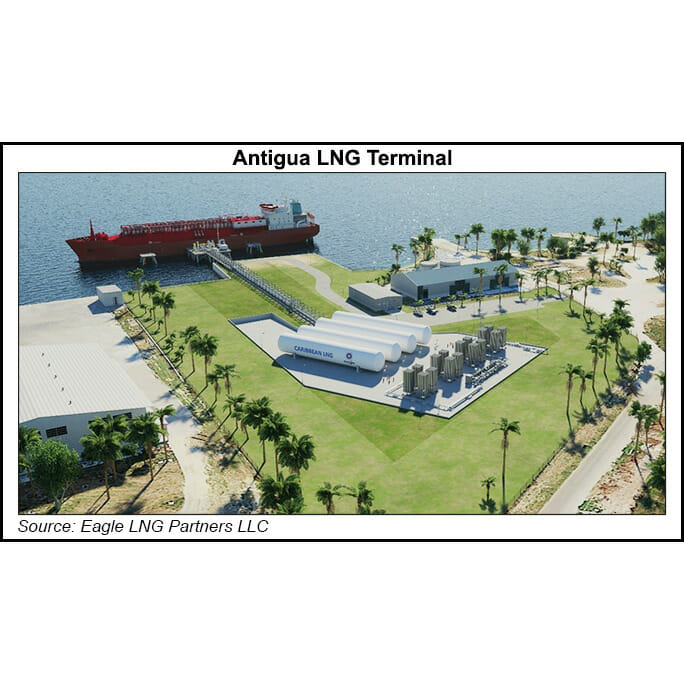 Caribbean LNG, a joint venture between Eagle and Antigua Power Co. Ltd. (APCL), selected Finland’s Wärtsilä to construct the power plant that would use light fuel oil and LNG. Independent utility APCL formed the joint venture (JV) last summer with Eagle, which is based in The Woodlands north of Houston.

The JV is developing an onshore terminal capable of feeding the 46 MW plant. The project also would include an LNG receiving, regasification and storage terminal.

APCL generates around 80% of the power for the West Indies nation with an all fossil fuel energy portfolio. The nation’s Antigua Public Utilities Authority (APUA) has been working with utilities such as APCL on projects to help displace fuel oil for power generation.

APUA has said the project could be the first in the East Caribbean to use LNG in conjunction with a power plant. The plant could be operational in fall of 2023, according to  Wärtsilä.

The project is to be supplied from Eagle’s proposed small-scale LNG facility in Jacksonville, FL. APCL director Francis Hadeed said it could give Antigua and Barbuda a secure and affordable supply as the nation transitions to lower-carbon fuel.

“Moving to gas also enables the greater integration of renewable generation in the country, and the introduction of bio-LNG and hydrogen into the fuel mix will further reduce carbon footprints and meet committed goals for the country on carbon reduction,” Hadeed said.

Gas used and stored at the Caribbean LNG facility would be purchased by APUA. Wärtsilä estimated switching to LNG could reduce the nation’s carbon emissions by 40%. The dual-fuel engines also would be capable of transitioning to use with hydrogen and ammonia, according to Wärtsilä.

Eagle has helped develop small-scale LNG solutions for other islands such as Aruba. Its facility in Maxville, FL also provides LNG for ships traveling from the United States to Puerto Rico. LNG is also provided for domestic customers in the Southeast.

Eagle extended its business in the Caribbean last month in an agreement with Curaçao’s state-owned utility Aqualectra NV. The agreement is to consider using natural gas for water distribution and power generation.