Eagle LNG Partners LLC has signed a long-term deal to supply liquefied natural gas (LNG) for a receiving and regasification terminal in Aruba as the company continues to expand its operations in the Caribbean. 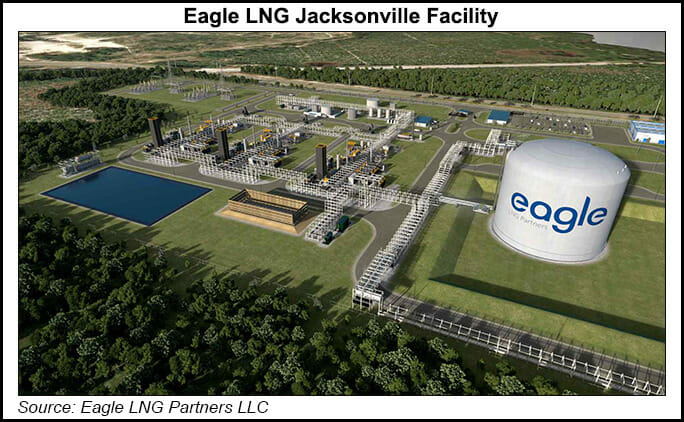 The $100 million facility in San Nicolas would offload LNG for Web Aruba, the local power and water utility, to fuel its Balashi power plant. The super-chilled fuel can be utilized by dual-fuel engines at the plant and would help displace heavy fuel oil or diesel.

“LNG fits in Web Aruba’s vision of cleaner, greener and fuel oil free production and we are working towards sustainable water desalination and energy production and supply,” said Web Aruba CEO Serapio Wever. “We welcome LNG as a transition fuel that eventually should lead to a mix of 50% renewable energy sources and 50% alternative fuels.”

Eagle said that by transitioning from fuel oil or diesel, the utility could cut emissions of carbon dioxide by 30%, nitrogen oxide by 75%, sulfur dioxide by 99% and reduce particulates by 90%.

Headquartered in Houston, Eagle develops small-scale LNG fueling solutions for the marine and power generation sectors in the U.S., Caribbean and Latin America.

The company’s Maxville facility just outside Jacksonville, FL, provides LNG for ships travelling from the U.S. to Puerto Rico. It also provides LNG for domestic customers in the Southeast. The company is developing a 1.65 million gallons/day LNG production facility in Jacksonville that was approved by federal regulators in 2019.

The Caribbean is considered a growth market for LNG given how close it is to exporters in the United States and Trinidad and Tobago. The fuel is also seen playing a broader role to displace fuel oil and diesel that’s widely used across the islands. The region has also served as an early proving ground for small-scale LNG applications that could be applied to other parts of the world including Africa and Southeast Asia.

Since last year, Eagle LNG has announced similar deals to work with LNG-to-power projects in Antigua and Barbuda.