Eagle Ford Shale activities will continue to power growth at Houston-based Carrizo Oil & Gas Inc. this year, management told analysts Tuesday, while the company remains “very encouraged” by its first well results in the Utica Shale in Ohio. One analyst suggested that Niobrara assets could be jettisoned with proceeds redeployed to South Texas. 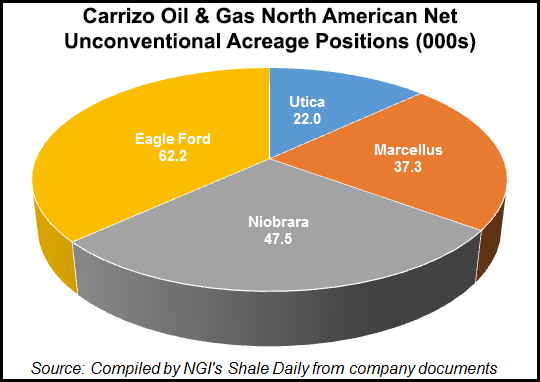 CEO Chip Johnson said the company last year completed its transition from a natural gas focus to oil with crude production growth of about 48%. “And 2014 is setting up to be an even better year for Carrizo as our continued success in the Eagle Ford Shale should drive production growth of approximately 50% this year.”

That crude production growth figure is up from a previous target of 40%-plus, thanks to the Eagle Ford. Due to the strong performance across its position in the play, Carrizo is increasing its type curve per-well estimated ultimate recovery (EUR) for the play to 523,000 boe from 495,000 boe. Carrizo said operating efficiency has continued to improve in the play, and it now expects completed well costs to average $7.5 million, down from $8.0 million.

Carrizo Eagle Ford acreage is 62,200 net, up from 58,000 at the end of the third quarter. Eagle Ford proved reserves are 57.7 million boe The company remains focused on leasing in the Eagle Ford’s core volatile oil window.

The company said it has increased its planned Eagle Ford Shale completions in 2014 due to the high returns generated from the play plus drilling and completion efficiencies. It now plans to complete about 49 net Eagle Ford wells in 2014, which equates to about 450 additional net frack stages compared to the previously announced plan. The cost of roughly 250 of the additional net frack stages is expected to be offset by the impact of the lower well costs.

Given the higher level of projected completion activity in the Eagle Ford, Carrizo increased its full-year 2014 drilling and completion capital expenditure plan by $50 million to $650-670 million. Land and seismic spending of $75 million remains the same as previously announced.

In the Utica Shale, Carrizo’s first well, the Rector 1H in Guernsey County, has been flowing consistently since Jan. 5 (see Shale Daily, Jan. 17). After progressively increasing the choke from 16/64 inch to 24/64 inch, Carrizo reduced the choke to 14/64 inch for a long-term stabilized test. The well has recently been flowing at a stabilized rate of about 500 b/d of condensate and 2.0 MMcf/d of rich natural gas with “very strong pressure” on the reduced choke, the company said. Carrizo “is very encouraged” by the early results as the condensate production is comparing favorably to the company’s type curve, which assumed an average initial 30-day condensate rate of about 500 b/d.

BMO Capital Markets analyst Dan McSpirit said in a note Tuesday that field-level returns from Utica wells could be competitive with what Carrizo is generating in South Texas and superior to what is coming from its Niobrara acreage “at least how we have it modeled,” he said.

“How proceeds from a theoretical divestiture of the Niobrara asset could be recycled into South Texas to accelerate the value capture could go further with the market than an increase in resource potential in the Denver-Julesburg Basin.”

Wells Fargo Securities analyst David Tameron said in a note Tuesday that he sees more production growth coming from Carrizo. “As the company shifts its focus from the Barnett towards the emerging Eagle Ford, Marcellus, Niobrara and Utica plays, we believe Carrizo will see an impressive production growth profile over the next few years while changing the production mix to be more weighted towards liquids,” he said. “We believe this growth, coupled with cash flow to cover anticipated capital needs will drive shares to outperform peers.”