As oil production continues its steep climb in the Eagle Ford Shale, the South Texas play is on track to surpass the Bakken, the shale oil production leader, in the near term, an RBC Capital Markets analyst said Wednesday. 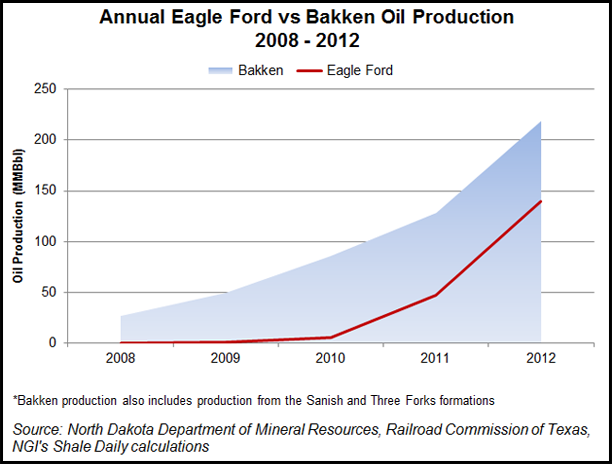 “The growth of the Eagle Ford has been impressive, and we think it will likely pass aggregate Bakken oil production in the near term,” wrote RBC’s Scott Hanold.

Hanold cited new data from the Railroad Commission of Texas (RRC) that shows preliminary March Eagle Ford oil production of 529,900 b/d and revised February production of 511,400 b/d. The data show that production is up 77% from year-ago levels. The revision to February data lifted that month’s production from the initial figure of 471,200 b/d.

“While the trend is correct, we believe actual production in the Eagle Ford is higher than what is being reported,” Hanold wrote. “Well-by-well production data obtained from our proprietary database has current oil production from February nearing 760,000 b/d, up 94% from year-over-year levels.” Hanold said actual March production could be 790,000-800,000 b/d when RBC updates its data.

Meanwhile in North Dakota, the state’s Oil and Gas Commission pegs March production at about 782,000 b/d, up 35% from a year ago. However, Bakken growth is lagging that in the Eagle Ford on a relative basis.

Hanold isn’t the first to predict that Eagle Ford production will overtake that from the Bakken. EOG Resources Inc. CEO Mark Papa called the Eagle Ford-Bakken race in early May during an earnings conference call. EOG is the largest leaseholder in the Eagle Ford with 639,000 net acres.

“We think there are only two major driving forces of the U.S. oil growth: the Bakken and the Eagle Ford,” he said (see Shale Daily, May 8). “The Eagle Ford is going to surpass the Bakken, likely this year, as the biggest oil growth rate. The Bakken is slowing down. The Permian [Basin] is really not on that faster track, and all of the other [plays] are not growing at a very fast pace at all. So we’re not as concerned as others that U.S. oil growth is going to flood the total market and ruin global oil prices.”

Stepping back and looking at Eagle Ford production data from a longer period shows what great strides producers in the play have made. Eagle Ford oil production during 2011 averaged 128,619 b/d, and it nearly tripled the following year to 381,317 b/d, according to RRC statistics. While the RRC said first quarter production was 512,455 b/d, if Hanold is correct, March production will prove to be more than double the 2012 level.

While the growth story for gas production is equally impressive, of late output has tapered as producers focus on the play’s oil window. In 2011, Eagle Ford gas production was 1,206 MMcf/d; it climbed to 2,039 MMcf/d in 2012, but during the first quarter of this year production came in at 1,945 MMcf/d, a decline of 4.6%, according to the RRC.