Crude oil production from the Eagle Ford Shale of South Texas was up by 74% in February compared with a year ago, reaching an all-time high of 471,258 b/d from the nine fields that comprise the majority of the play, according preliminary data from the Railroad Commission of Texas (RRC). 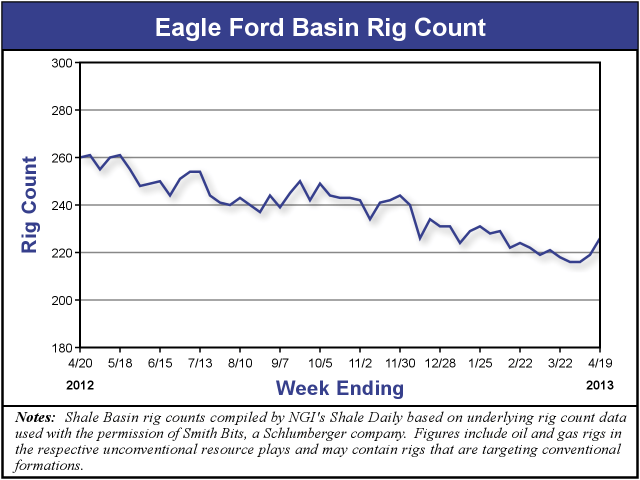 Eagle Ford activity is making its presence felt in in South Texas towns like the city of Von Ormy, which is southwest of San Antonio. Sales tax revenue there is up 60% compared with a year ago, according to the San Antonio Business Journal. Credited for the increase is increased traffic on Interstate 35 going to and from the Eagle Ford as travelers have been patronizing area business along the way.

While casinghead gas production is a fraction of overall Texas gas volumes, its numbers have been inching up with the increase in the state’s oil production, primarily in the Eagle Ford Shale. At the same time, gas well volumes are declining. Texas produced nearly 7.52 Tcf in 2012, a decline from the 2011 total of more than 7.90 Tcf. Casinghead production increased from 1 Tcf to 1.3 Tcf from 2011 to 2012 while gas well gas declined from 6.9 Tcf to 6.2 Tcf.