The San Antonio, TX, metropolitan area has gained about 4,000 jobs from the Eagle Ford shale Play, and its upcoming major road improvements could tap up to $12 million annually from the oil/gas development, according to a report released Tuesday by the San Antonio Economic Development Foundation. 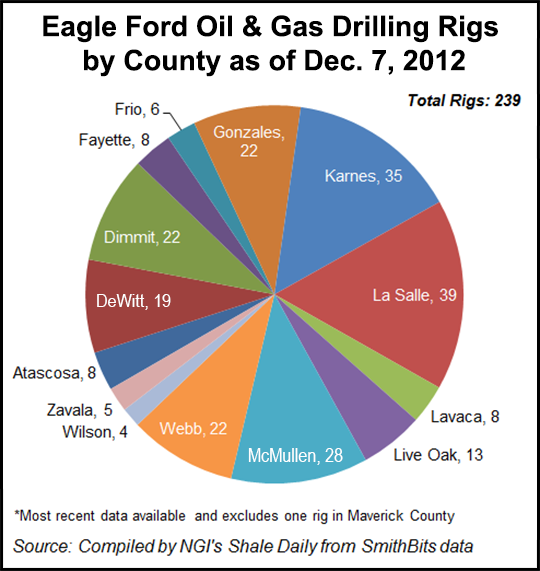 In a report earlier this year the University of Texas, San Antonio, determined the Eagle Ford’s economic stimulation to a 14-county region of south Texas equated to $25 billion and 47,000 full-time jobs (see Shale Daily, May 10). The foundation report said Bexar County’s share was more than $705 million and 4,290 full-time jobs.

Under an Eagle Ford Task Force formed by the city’s leadership and created in the economic development unit, a public dialogue on the shale play’s influence was started among key stakeholders, industry officials, academic, civic and municipal leaders. They were asked to help identify key issues, challenges and opportunities in the San Antonio metro area.

With projections for the Eagle Ford play lasting up to 40 years, the task force has created recommendations that companies involved in the oil/gas development can help in public education, transportation and small business expansion.

“The shale formation is generating opportunities for a broad spectrum of stakeholders, and it has become evident that the oil/gas industry’s exploration and extraction efforts require a greater level of support than can be directly provided by the communities that sit above the shale,” the report said, noting that San Antonio has “many strategic advantages” for Eagle Ford operators who want to make it their business destination.

The recommendations point to having the companies more involved in the greater San Antonio’s education, transportation and small business programs. “The challenge is to develop work force to fill jobs for Eagle Ford Shale and targeted industries,” the report said, adding that the same challenges exist in the transportation and small business sectors.

A Texas Department of Transportation analysis was cited in the foundation report as estimating more than $200 million for road repair and reconstruction due to the transport of sand, water, pipe and other commodities to the Eagle Ford. So far, the state has allocated $26 million in road repairs.

One recommendation from the San Antonio report is that Texas prioritize its resources so some monies can come to Bexar County, which needs help with “the burden imposed upon roads and bridges” from Eagle Ford-related transportation associated with natural gas development.

Eagle Ford operating companies also can help meet these community needs, according to the foundation report.

There were 239 drilling rigs operating in the Eagle Ford as of Dec. 7, according to Smith Bits data, including 39 in La Salle County, 35 in Karnes County, 28 in McMullen County and 22 each in Dimmit, Gonzales and Webb counties in Texas.