Carrizo Oil & Gas Inc. plans to spend $500 million on drilling and completions this year, with the lion’s share going to the Eagle Ford Shale in South Texas. 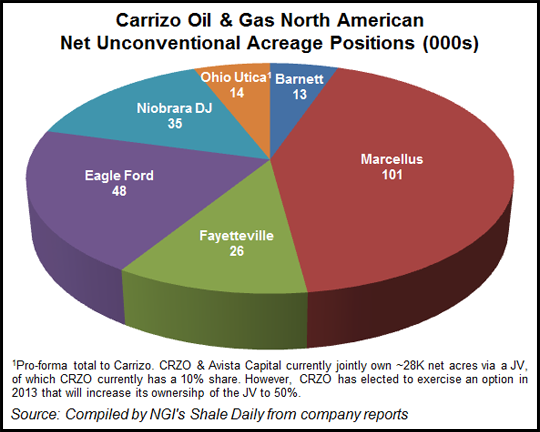 “This 2013 plan allows us to maintain our current level of drilling activity plus the addition of a new rig working in the Niobrara Formation for the entirety of 2013,” said CEO Chip Johnson. “Our rig count will remain at three rigs running in the Eagle Ford Shale, one rig drilling in the Marcellus Shale and now two rigs running in the Niobrara Formation. This drilling activity supports our previously announced 2013 production forecast for approximately 28% annual growth in oil production and a natural gas production decline of approximately 3%.”

In November Johnson touted the company’s shift to oil production, primarily focusing on the Eagle Ford and Niobrara, during a presentation to financial analysts (see Shale Daily, Nov. 8, 2012).

“As the company shifts its focus from the Barnett [Shale] towards the emerging Eagle Ford, Marcellus, Niobrara and Utica plays, we believe Carrizo will see an impressive production growth profile over the next few years while changing the production mix to be more weighted towards liquids,” Wells Fargo Securities said in a note Tuesday. “We believe this growth coupled with cash flow to cover anticipated capital needs will drive shares to outperform peers.”

Additionally, the Carrizo board-approved spending plan for land, seismic and related activities allocates $124 million to these.

“Our land acquisition costs are expected to be heavily front-end loaded and includes the cost to exercise our southern Utica acreage option with Avista Capital,” Johnson said. “Based on very encouraging drilling results in the southern Utica Shale play…we elected to exercise our land purchase option with Avista Capital for approximately $63 million. After the land purchase, Carrizo will own approximately 14,000 net acres in the play, predominantly located in Guernsey, Noble and Tuscarawas Counties, OH.”

BMO Capital Markets said it liked how the Carrizo (CRZO) story is evolving.

“We like the more focused and, maybe, less complex story CRZO is telling the market these days,” BMO said. “Throw on top of this support for the shares that may come from anything that smells of the Utica Shale and you can see continued outperformance beyond what we’re observing today.”