Sanchez Energy Corp. said it achieved record production during the second quarter and reduced its capital expenditures (capex) budget for 2015, but it raised its production guidance for the rest of the year, as it focuses on high-quality, low-cost oil and condensate resource plays in the Eagle Ford Shale. 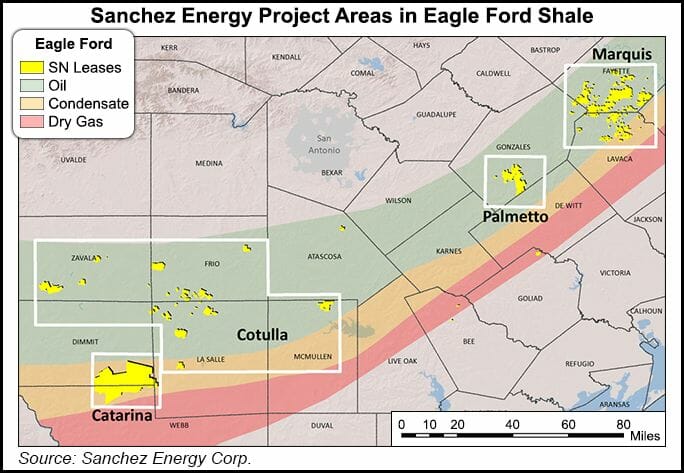 Sanchez management said it remains focused on Catarina, one of four project areas the company has in the Eagle Ford (see Shale Daily, March 4). CEO Tony Sanchez III said that during the first year operating its Catarina asset, the company successfully drilled 68 wells toward its 50-well annual drilling commitment there. The 18 wells over the commitment would be banked toward the commitment for the next year, which began in July and runs through June 2016.

“Our next drilling commitment at Catarina will be largely met by the end of this year 2015,” the CEO said during a conference call to discuss the second quarter on Monday. “This gives us considerable flexibility to drastically reduce activity in the first half of next year as warranted by market conditions.

“In the next couple of weeks, we plan to decrease our active rig count down to two rigs, with those rigs focused on drilling efforts at Catarina.” He added that drilling and completion activity would be curtailed in the Tuscaloosa Marine Shale (TMS), where it holds 66,000 net acres.

Sanchez also slashed its preliminary capex budget for 2016 in half, to $250-300 million. Although $300 million less than the high end of its capex budget range for 2015, the company said its budget is designed to maintain flat year-over-year production while meeting all of its significant lease obligations.

Sanchez’s three other project areas in the Eagle Ford are Cotulla, Marquis and Palmetto. The company said it currently has 565 gross producing wells, with 32 in various stages of production. Catarina topped the list of producing wells (238), followed by Cotulla (139), Marquis (103), Palmetto (72) and the TMS (13). Twenty-seven wells are awaiting completion in Catarina, followed by four in Palmetto and one in the TMS.

The company reported total revenue of $141.1 million during 2Q2015, compared to $151.7 million in 2Q2014. It reported a net loss attributable to common stockholders of $566.9 million, which includes a non-cash after tax impairment charge of $468.9 million and a non-cash mark-to-market loss on the value of its hedge portfolio of $61.9 million, the latter being offset by $28.1 million in hedge settlements.

In a note Monday, Dan McSpirit, analyst for BMO Capital Markets Corp., said that on first blush it appears Sanchez is focusing on liquidity preservation in 2016.

“Maybe the need to do so is greater with Sanchez, [considering] the 50-well commitment at Catarina and with 18 wells currently banked toward their next commitment,” McSpirit said. “Add to this greater weighting toward natural gas and NGLs [natural gas liquids] than what you see with other Eagle Ford Shale producers — like Carrizo Oil & Gas Inc. — a reality that may make it more challenging to generate margin.

“Still, liquidity is abundant and the inventory is deep, and one that looks to being de-risked further with drilling outside the core western Catarina leasehold, where early results point to recoveries greater than a 600,000- 700,000 boe type curve.”