Frio County, TX is in the heart of Eagle Ford Shale country, but drilling waste hauling and disposal worries have overshadowed the economic boom that oil and gas activity has brought to the South Texas region, county officials said. 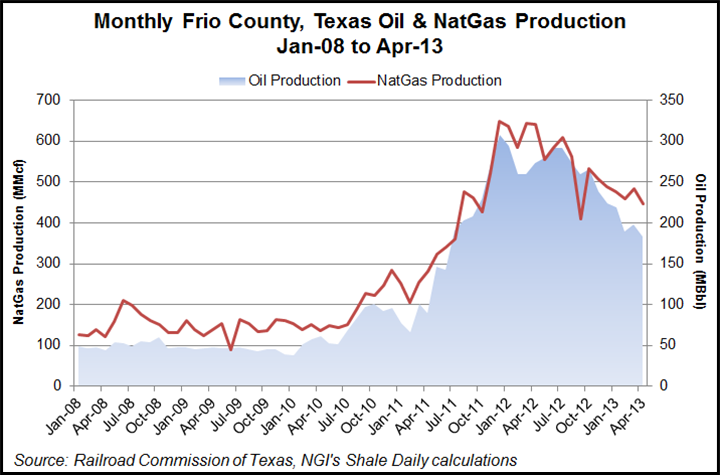 “The Eagle Ford frack waste and its related disposal business partnerships are placed on notice to consider responsible and fair practices to dispose in Frio County,” said County Judge Carlos Garcia. “While we do not have the revenue streams from well completions, we cannot justify accepting volume waste at the risk of our environment without economic and social justice.

“The facts clearly state Eagle Ford has an indication of 77% increase in the production of oil exploration and this waste is now coming to Frio County. We must strike a balance to successfully promote the potential of our local economy, while we are also striving to protect our environment — yes, we are being challenged!”

The commissioners recently passed a resolution opposing new disposal wells in the county; however, it’s the Railroad Commission of Texas that has regulatory oversight of injection wells. There are more than 7,500 active disposal wells statewide.

Jose Flores, county commissioner for precinct 4, told NGI’s Shale Daily that the commissioners would like some help paying for the repair of road damage caused by Eagle Ford truck traffic. Others, however, are concerned about well water contamination. Flores said this is not a worry of his, but the issue is likely to come up at the meeting Thursday. “We’re getting a lot of traffic that’s on our roads and we’d like anything to help to fix those roads. That’s where we’re coming from,” he said.

Frio county has been the site for disposed oil and gas field waste with an increase of 473% within one year, according to the county commissioners. The rural community is located along Interstate Highway 35, which offers convenience and transportation accessibility to new businesses and frack waste disposal facilities.

“Over a year, Frio County has closely monitored the positive and negative effect of Eagle Ford, Garcia’s office said in a statement. “Unfortunately, the county is becoming the recipient of oil field waste without the extended economic benefit also apparent in rising barrel counts of injected waste per day. This activity has resulted in large waste hauler trucks imposing accelerated surface transportation roadway deterioration which will become more prevalent in a matter of one to two years.”

“Our leadership mission is to collectively work with all stakeholders as we promote the development of Eagle Ford oil and gas industry. Jointly, we are responsible to promote clean air, enhanced public safety, safeguard quality of water, proper land use and management of disposed waste; as we also attempt to promote our local and state economy,” said Richard Graf, county commissioner precinct 2.

The meeting is to be held 6-8 p.m. CDT at the Dilley, TX, elementary school cafeteria, 213 Harriman St.