The outlook is bright for the U.S. oil and gas producers, based on a survey about borrowing base redeterminations by Haynes and Boone LLP. 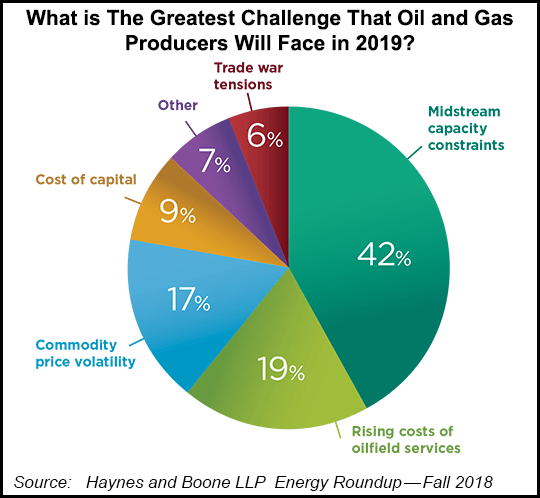 A survey of exploration and production (E&P) operators, oilfield services companies, energy lenders, private equity firms and other industry participants compiles predictions about the future borrowing capacity of E&Ps. Results from the fall and spring surveys have been compiled by Haynes and Boone since April 2015; the latest was done earlier in September.

More than 78% of the respondents expect E&P borrowing bases to increase, with 36%-plus forecasting an increase of at least 20%. The overall results strike a note of optimism “on par” with the firm’s spring 2018 survey, the law firm said.

“Strong oil prices are leading borrowers to roll forward their hedging,” the survey found. “The respondents estimate that producers have a significant percentage– 50-60%– of their 2019 production hedged.”

Expectations for capital sources “were almost identical to our spring 2018 survey results.” E&Ps are continuing to favor “cash flow from operations, bank debt and private equity as their primary sources of capital.” Their “biggest concern” in 2019, the survey found, is midstream capacity “by a significant margin.”

Borrowing base redeterminations are conducted by financial institutions twice a year. Many small/mid-cap E&Ps use lines of credits to access debt capital. The credit lines, used to fund working capital and drilling expenditures, typically are secured by liens on oil and gas properties. Borrowing bases are determined from the value of the reserve base, found by multiplying the volumes in proved developed producing properties by an assumed price deck.

“The filings show a continued decline from the surge that followed the oil price collapses that started in late 2014,” the firm noted. Bankruptcy filings by energy companies are tracked through three databases updated periodically.

Haynes and Boone has tracked 160 North American E&Ps that have filed for bankruptcy since the beginning of 2015. These bankruptcies, including Chapter 7, Chapter 11, Chapter 15 and Canadian cases, involve about $92.9 billion in cumulative secured and unsecured debt, the firm noted.

In the United States, 142 bankruptcy cases have been filed since 2015. As of Aug. 31, 22 producers had filed for bankruptcy this year, representing about $9.0 billion in cumulative secured and unsecured debt.