A long-standing willingness by exploration and production (E&P) companies to outspend their cash flow may butt up against concerns about leverage and commodity uncertainty as 2018 capital spending budgets are planned, according to Raymond James & Associates. 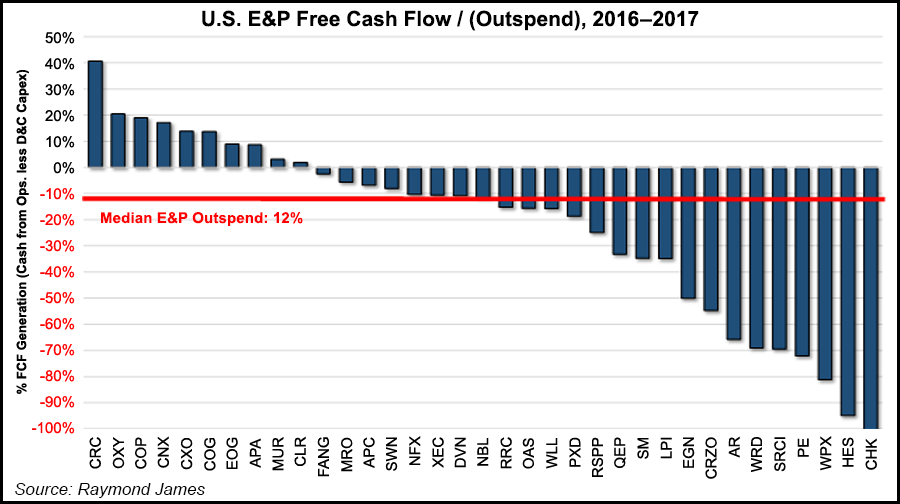 The E&P discussion was a drilldown was on the interplay between cash flow and capital spending, i.e. the extent to which operators have been willing to overspend. The Raymond James team, using a price deck of $70/bbl West Texas Intermediate (WTI), earlier this year calculated that U.S. E&P budgets this year were averaging up 58% from 2016, suggesting most operators were assuming oil prices in the mid-to-high $50s.

With prices averaging only around $50 and below, 2018 capital spending should trail down.

“First, it is worth debunking (yet again) a common myth that we continue to hear vis-a-vis U.S. unconventional producers, and to some extent their Canadian counterparts,” said analysts.

“The false notion that shale volumes can grow massively” at $35-40/bbl WTI suggests a misunderstanding of how companies craft their capital programs.”

Investors often focus on well-level breakevens, the same metrics E&Ps want to talk about. However, the “next well” economics don’t include all of the costs of doing business. “Full cycle” shale returns generally aren’t positive at a WTI price under $45/bbl because of corporate general/administrative costs, land fees, interest expense and in some cases, dividends.

Most E&Ps still are focused on growth rather than returns, a mentality that slowly appears to be changing. Domestic E&Ps often spend 20-30% above their generated cash, based on averages over the past 20 years, which means means cash flow is a better gauge of future domestic oil supply growth.

In 2018, the double-digit outspending likely will decline.

“First, the fact that WTI for much of 2017 has had trouble staying durably above the $50 level means that companies are reluctant to set budgets based on a more ambitious price deck than what they see on the strip,” analysts said. “The pressure to hedge, particularly among the smaller players, makes the shape of the curve very impactful.”

In addition, the E&P industry’s leverage metrics “are not in great shape. Average debt/cap is currently 54%, nearly 1.5 times higher as compared to 38% five years ago, which makes substantial further borrowing rarely a viable option.”

Equity is available, especially for Permian Basin players. And asset monetizations/spinoffs are commonplace. However, “pressure from lenders to generally live within cash flow cannot be overlooked.”

For Canadian E&Ps, the approach to cash flow/spend is similar to their U.S. counterparts, with median outspend this year estimated at around 27%. Dividends also play a more important role for Canadian E&Ps.

The Canadian explorers often take a more aggressive/risky capitalization approach to spending than the Lower 48 operators, an approach that may not be a bad thing, according to Raymond james.

Canadian E&Ps “can and should be more aggressive on their capital spending because they are achieving better full-cycle returns than U.S. peers. Naturally, this is only a generalization, and there are exceptions, e.g. oilsands being an obvious example of high-cost resource.”
Skeptics may dispute the Canadian advantage, but the Raymond James team said “not enough attention is paid to the Canadian advantages of better land tenures, lower royalties, higher condensate pricing, and very competitive cash and full-cycle costs.”