Canada’s Duvernay Shale has the potential to become one of the “most attractive liquids-rich plays” in North America, according to Wood Mackenzie analysts, who point to ExxonMobil Corp.’s decision this month to pay $3.1 billion for one of the play’s biggest developers as affirmation. 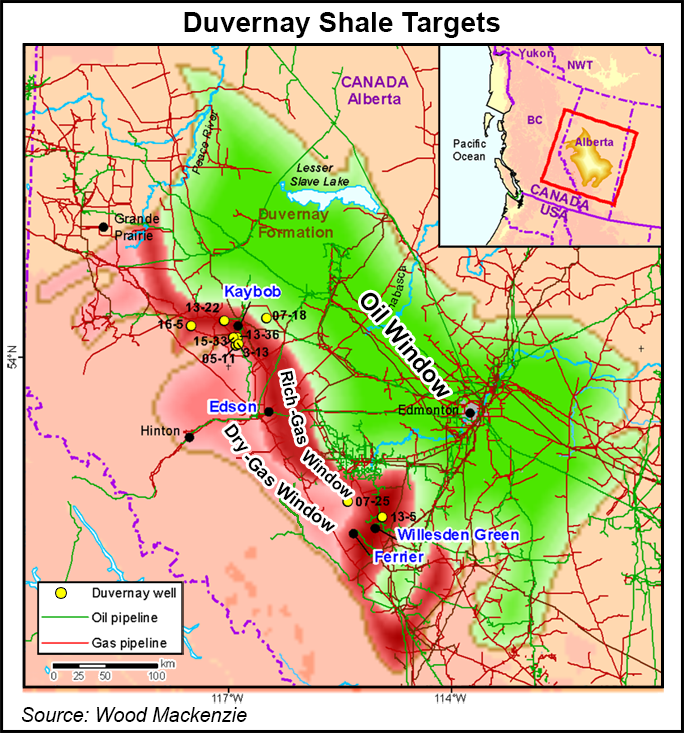 Andy McConn and John Dunn, who recently co-authored a report on the Duvernay for the UK-based consultant, spoke with NGI’s Shale Daily about the emerging Canadian unconventional play, which they think has a lot of potential.

“In general terms, it’s one of the bigger resource plays,” said McConn. The Duvernay has been in the crossfire of many explorers, large and small, over the past few years but only now are they beginning to delineate the formation.

What makes the Duvernay another in a long line of emerging unconventionals is its “high condensate content,” which would support the economics for developers, said the duo.

The latest well results are helping to define the play’s extent, which indicates windows of dry natural gas, rich gas and oil.

“Much of this activity has been around Kaybob in the northwest of the play, which is emerging as an early sweet spot,” said Dunn. “However, we now expect drilling to pick up in areas further south, such as Edson, Rimbey, Willesden Green and Ferrier, as companies high-grade their acreage.”

Determining the exact size of the Duvernay is, at this point, difficult, because explorers only now are delineating and high-grading their leaseholds, said McConn. The Duvernay also is near the Montney Shale. However, ExxonMobil’s announcement to buy Duvernay player Celtic Exploration Ltd. is an affirmation that the formation is an above-average prospect, said the analysts (see Shale Daily, Oct. 18). ExxonMobil’s acquisition includes 545,000 net acres in the Montney Shale and 104,000 net acres in the Duvernay.

ExxonMobil is a “big name to help credibility” of the Duvernay, said McConn. “It will take the likes of very large players with a position, someone with that size, with capital” to open the Duvernay to expanded development. The biggest leaseholder is Encana Corp., which has about 400,000 net acres. Canadian Natural Resources Ltd. and Talisman Energy Inc. both have more than 350,000 net acres, while Bonavista and an affiliate of Chevron Corp. have close to 250,000 net acres.

“Many operators, including Encana, Talisman and Chevron, managed to build and cement their positions during the land rush that began in 2009,” according to the Wood Mackenzie analysts. “Others, including smaller players such as Bonavista, are fortunate to hold legacy Duvernay rights from properties producing from shallower horizons.”

Most of the activity today is centered in Kaybob in the northwest, which appears to be an early sweet spot, said Dunn. Drilling is expected to pick up south of Kaybob in Edson, Rimbey, Willesden Green and Ferrier as acreage is high graded, he added.

Even though the Duvernay has long been known to hold a lot of unconventional reserves, what has inhibited full development until now is its remote location. A lack of infrastructure isn’t a hindrance, yet.

“It comes with development, and that is in early stages,” said McConn. “What it would look like, in terms of pipelines, midstream operations, is the same thing that’s happened all across North America, which wasn’t prepared for the huge surge in production, he said. “The Duvernay is subject to some of the same issues occurring in different plays, like the Bakken. In differentials, we’re not seeing quite the prices because it’s so early in the play’s life, but as development ramps up, we will see where the shortfalls are. But today infrastructure is not viewed an an inhibitor.”

Another issue still to be dealt with are the high costs of development because of the remote location, said the analysts. The Duvernay “is home to some of the most expensive wells onshore” in North America. Total estimated costs to drill a well are US$12-14 million, versus most U.S. unconventionals today that are below $10 million. McConn and Dunn believe the costs will come down as producers use pad drilling, retain long-term hydraulic fracturing crews, have better water sourcing and optimize completion techniques.

“Based on the evolution of other high-cost plays (such as the Montney), we believe the well costs will average between US$10 million and US$12 million on full-scale development.”

A “key decision” facing operators as they shift from the dry gas window to developing natural gas liquids (NGL) is the method they use to process them, said McConn.

Deep-cut facilities extract more lighter hydrocarbon NGLs, which include butane (C4), propane (C3) and ethane (C2), versus the higher-cost and more traditional shallow-cut facilities, which refrigerate the rich gas to colder temperatures. Traditional shallow-cut facilities extract fewer lighter-hydrocarbon NGLs, but they cost less to build. In addition, operators may opt to send their gas to third-party facilities, as Celtic is doing. Talisman has opted for deep-cut, in part because its ethane may be more valuable because of a supply agreement in place with Dow Chemical, said the analysts.

The Duvernay’s economics are supported by Canadian condensate prices, which usually attract a premium to West Texas Intermediate because of the high demand from Canada’s oilsands sector, they said. There’s no difference in the amount of condensate extracted from shallow or deep-cut plants, but prices have weakened on gas oversupplies.

Those looking to get into the Duvernay will pay the price, said the duo. Most of the prospective acreage already has been called for, but there are lease sales where some land, especially in the southern end, still will be marketed. What the players are watching for are “any results that reveal the potential of the play’s oil window,” said McConn and Dunn. “The value of companies’ acreage could drastically change” on new information.

Dunn said “a lot of larger players have a variety of opportunities, not just plays in North America,” and the Duvernay is not yet at the top of most producers’ to-do lists. However, as delineation continues and developers “find out where the sweet spots are, how to develop their position” that will change.

“We’re still in very early stages,” Dunn said. “Players are figuring out what’s the best well configuration, where to drill, where the core area is…Everything.”