The Netherlands will rely on increasing liquefied natural gas (LNG) imports instead of counting on domestic gas production from the Groningen field to help replace Russian imports. 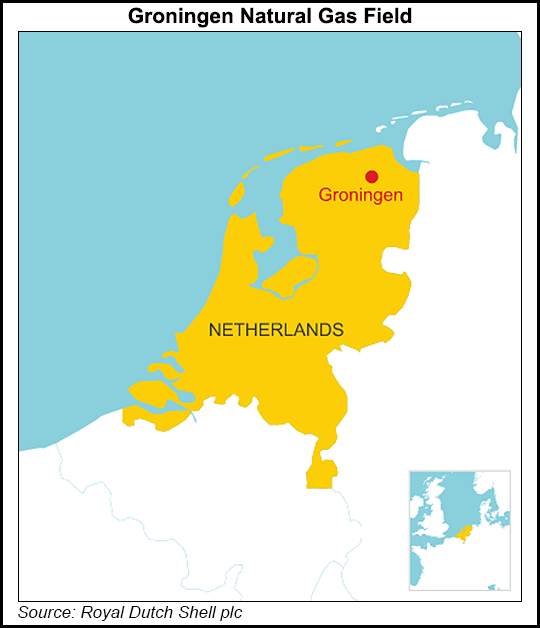 The Dutch government has decided against increasing output from Groningen, which was under consideration as a way for Europe to refill natural gas storage and displace Russian supplies.

“This is the last normal gas year for Groningen,” said Jules van de Ven, spokesperson for the Dutch Ministry for Economic Affairs and Climate Policy. “The field will remain available in case of emergency starting October 2022 with only a minimal flow” of about 1.5 billion cubic meters (Bcm) annually, van de Ven said.

“We’re planning to permanently close down the field in either 2023 or 2024, meaning that production will be zero and all gas wells will be abandoned and cleaned up,” he told NGI.

Europe has depended on production from Groningen for decades. It was once one of Europe’s largest gas fields, reaching peak output of 88 Bcm in 1976. It was producing nearly 30 Bcm as recently as five years ago.

The field had been slated for closure this year after years of earthquakes, but a cold winter left Europe’s storage inventories depleted and Russia’s invasion of Ukraine stoked further supply concerns.

A new coalition government was left with the decision whether to increase Groningen’s gas output to help replace Russian gas imports after Dutch citizens were promised the Groningen field would cease gas production, given the earthquakes.

Gasunie advised the government not to “further reduce the technical production capacity of the Groningen field considering the current geopolitical situation, but did not  advise the government to maximize production in Groningen.”

The company suggested the government postpone refitting of the Grijpskerk storage site for one year as “this would be beneficial for security of supply without needing to increase production volumes from the Groningen field,” den Haak said.

Grijpskerk is an underground seasonal gas storage site for Groningen production.  Dutch gas company Nederlandse Aardolie Maatschappij BV intended to close the storage facility at the end of 2021, in line with Groningen’s decreasing output.  However, the Dutch economy ministry has issued a draft approval for Grijpskerk to now store high-calorific, rather than the low-calorific gas that comes from Groningen production.

Gasunie plans to increase the import capacity of the Gate LNG import terminal in Rotterdam from 12 Bcm/year to 16 Bcm/year, den Haak said, reaching an agreement with Exmar for the lease of the 4-5 Bcm/year floating storage and regasification unit. The vessel is set to begin operating by the end of the year at the Port of Eemshaven in Groningen.

“Since the Netherlands is only 15% dependent on Russian gas imports, around 5- 6 Bcm/year, increasing LNG capacity will replace those volumes,” den Haak told NGI.