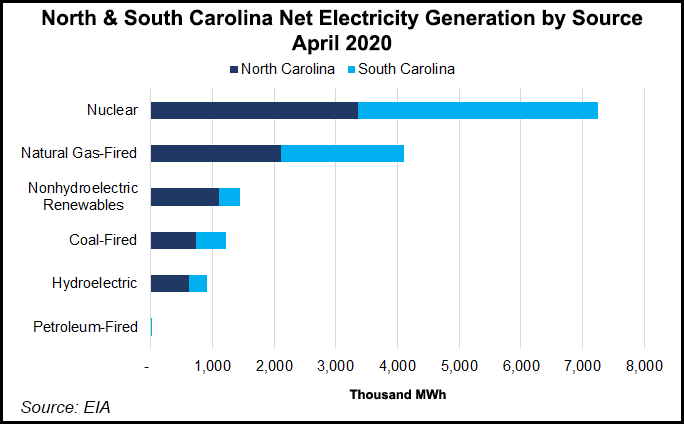 The new station generates enough energy to power roughly 450,000 homes, according to Duke.

Construction led to $128 million in work to suppliers in the Carolinas, Florida and the Midwest, as well as $17 million for businesses owned by minorities, women and veterans.

The Asheville station replaced the 344 MW coal-fired Asheville Plant built in 1964 and retired in January. Most of the 30 employees operating and maintaining the new gas-fired station previously worked at the coal plant.

Duke’s most productive electricity output in the Carolinas now is from the Asheville station and is said to be 75% more efficient than the retired coal plant. According to Duke, Carolina customers benefit from the more efficient station because of lower power plant fuel costs.

CO2 emissions at the site have dropped by about 60%/MWh in comparison to the now-retired coal plant, Duke noted. Sulfur dioxide emissions are projected to decrease by 99%, and nitrogen oxides by 40%. Mercury has also been eliminated.

Duke Energy Progress is in the process of investing more than $175 million in western North Carolina to upgrade power lines, electrical substations and more equipment. Additionally, the company is also investing $120 million for renewable energy projects in the region. The projects include building a 9-10 MW solar plant with a 17-18 MW battery storage facility at the Asheville station as soon as the retired coal plant is deconstructed.