In an effort to further its goal of achieving net-zero carbon by 2050, Duke Energy is taking part in a study to convert retiring coal units into long-duration, zero-emissions energy storage systems. 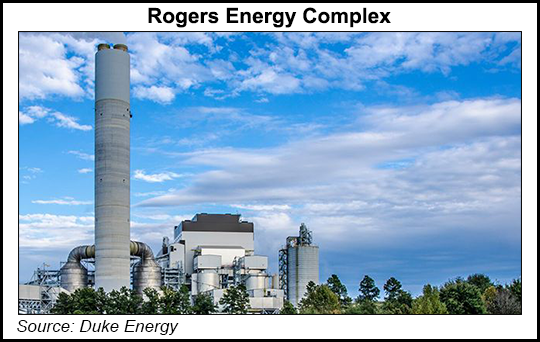 The focus is on 10-12 hours of energy storage, but the Malta system could be configured to store up to 200 hours.

“For years, Duke Energy has actively evaluated emerging technologies, and the Malta study marks the first time we will evaluate long-duration thermal energy storage,” said Duke’s Regis Repko, senior vice president of Generation and Transmission Strategy. “We expect the results to influence the future of energy and apply to our larger generation fleet.”

Malta is developing a pumped heat energy storage system that leverages current subsystems, components and thermodynamics in a “novel” energy storage application, according to Duke. “By leveraging existing subsystems from well established industries, the system relies on decades of performance data to ensure safe, resilient operations.”

Malta CEO Ramya Swaminathan said for utilities like Duke to meet their net-zero carbon emissions goals, major advancements in technology are needed. “The Malta system could be part of the solution by providing zero-emissions, load-following technology that provides reliable, resilient and around-the-clock power.”

The study is funded by a U.S. Department of Energy grant and would include an engineering conceptual study, a technology maturation plan and a socioeconomic report on potential benefits. These include job retention, local economic impacts, and environmental and operational benefits.

Malta, a startup spun out of Google X, also is partnering with Texas-based utility Vistra Corp. and the Southwest Research Institute to study how its energy storage system may improve the environmental and economic performance of natural gas power plants. It also is examining how the energy storage system can help to balance the diverse power generation on electric grids and improve the reliability and resiliency of the electric system as more intermittent renewables come online.

The positive momentum on the alternative energy front came days after a proposal to Duke by stockholder and hedge fund investor Elliott Management Corp. to split up into three separate utilities.

In a letter to the utility, Elliott management said it believes Duke owns one of the “highest quality and most under-appreciated” utility franchises in the country. However, the company’s “sprawling, noncontiguous” portfolio of utilities has “burdened” shareholders with a “conglomerate discount” relative to the value of Duke’s utility franchises.

“Duke’s current ownership of utility businesses across three separate geographies has delivered few benefits for stakeholders and has left its Florida and Midwest utilities under-managed and undervalued,” Elliott’s letter stated. “Based on our extensive analysis of Duke’s businesses, we believe that Duke should conduct a thorough, unbiased review of a tax-free separation into three regionally focused, publicly traded utility holding companies: the Carolinas, Florida and the Midwest.”

Elliott called for the review to be completed by an independent board committee, new directors and outside advisers. The hedge fund said separating the utilities could create $1-15 billion of line-of-sight near-term value for shareholders.

Duke responded to Elliott’s proposal, the latest in a series the hedge fund has offered since last July. Duke management said the proposed “shrink-the company” strategy runs counter to the strategic direction of the entire industry at a time when scale is needed to “efficiently finance the company’s unprecedented capital investment and growth opportunities.”

In addition, Duke said the proposal ignores the “obvious” capital structure and credit issues. Duke said Elliott also refuses to share with management the details behind its myriad proposals.

Duke plans to review the latest proposals, however. The company indicated it is “always open to new ideas to create growth and value. However, Duke Energy and its board of directors will always advocate for the best long-term interests of its shareholders and other stakeholders over any narrow special or short-term interest.”