Hedge fund investor Elliott Management Corp. is once again seeking to shake up Duke Energy, publicly questioning whether the North Carolina-based utility’s current leadership should continue to manage its businesses outside of the core Carolinas footprint. 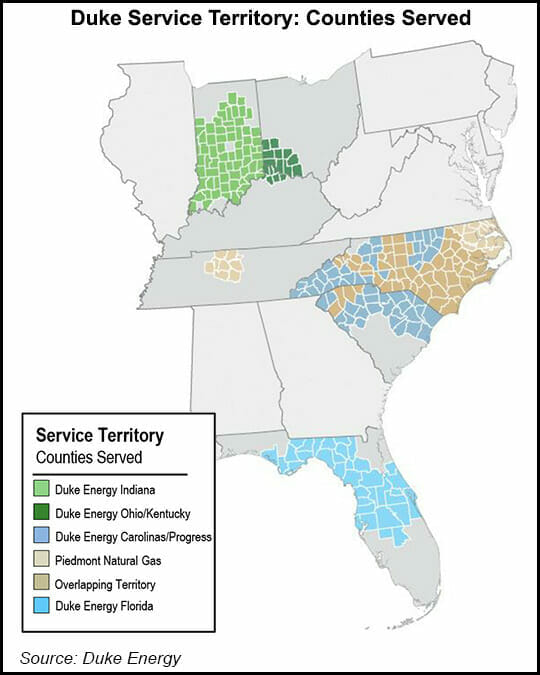 In a letter sent to Duke’s board of directors, Elliott acknowledged that fellow investors, stakeholders, market analysts and advisors believe that “Duke owns one of the highest-quality collections of premium utility businesses propelled by tailwinds from constructive regulation, positive demographic trends and significant investment opportunities.” However, there is significant room for improvement when it comes to operational execution and attaining a premium valuation for the company, it said.

Elliott called on Duke to address investor concerns over the independence of the board, particularly in light of the long tenure of the lead independent director. It said Duke should heed the proposal submitted at this year’s annual meeting requiring Duke’s board chair to be an independent director.

The activist investor also said Duke should address the fact that despite nearly 40% of Duke’s value residing outside of the Carolinas, the current board has “no directors with credible public policy experience in or ties to Florida or Indiana.” Elliott made other suggestions tied to operations and growth at Duke’s Florida and Indiana utilities.

“As one of Duke’s largest investors, we remain skeptical that the same structure and leadership team that have presided over a long history of operational and stock price underperformance are capable of delivering meaningfully better results in the areas” outlined, Elliott said. “Duke’s assertions to the contrary will continue to ring hollow in the absence of specific commitments to which it can be held accountable.”

However, the investor said it intends to continue fostering an “active debate over the right path forward for Duke, and holding the company accountable if it fails to improve.”

Duke responded to Elliott’s letter shortly after it was published, calling it the “latest attempt” by the hedge fund to “push its short-term agenda” at the expense of long-term shareholder value.

The utility said it “remains open to value-creating ideas” as it pursues continuous operational improvement. It “frequently engages with shareholders for their input, including a good faith engagement with Elliott over the last year.

“However, Elliott has again failed to provide any concrete and specific ideas to increase shareholder value, choosing instead to launch public attacks supported by cherry-picked data and anonymous sources,” Duke said.

Earlier this year, the investor called for a review of splitting the company into three separate, regionally focused utilities. Previously, Elliott proposed a shareholder plan that would issue $7 billion of equity to the hedge fund at a discounted rate, which Duke said “would materially dilute Duke’s existing shareholders.”

Elliott’s attempt to undermine Duke’s leadership team “ignores the diverse and experienced professional talent that drives this company and is silent on the significant accomplishments it has achieved,” according to the utility.

It noted that nine out of 13 board directors were first appointed in the last five years. The number of women represented, meanwhile, has doubled to four since 2017. The average tenure is 4.7 years, compared to 6.8 years in the peer set disclosed in Duke’s proxy. Duke also noted that each current board member has served in senior leadership roles across multiple industries, and seven have deep operational experience in the utility industry.

“Duke Energy will continue running the business in the best long-term interests of all shareholders and stakeholders, and not those of a single hedge fund focused only on the short-term and with a decidedly mixed track record in its other interventions in the utility sector.”

Duke is scheduled to release its second quarter 2021 earnings on Aug. 5.