Flooded with natural gas from the Marcellus and stung by the demands of this month’s repeat appearances of the polar vortex, Dominion Transmission (DTI) said it will limit north-south nominations on its system beginning no later than Feb. 1, a decision that could have implications for drillers in the prolific shale play. 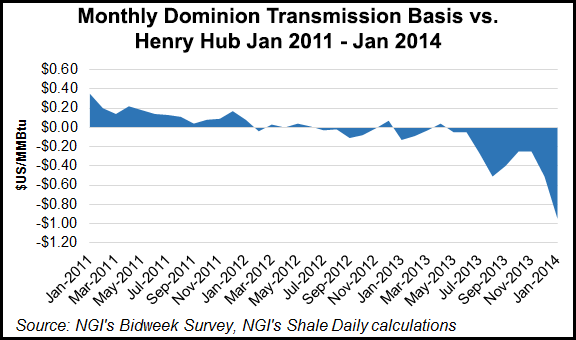 “However, these extreme volumes that we’ve received in the north, particularly from the Marcellus…combined with the reduction in the physical supplies in the south, is impacting our ability to manage the loads, to balance the markets between the north and the south, and could potentially jeopardize our ability to fill our firm requirements and particularly stress out our storage system,” said Joe Kienle, director of systems planning.

Similar historical issues in the south required restrictions moving gas from south to north. As a result of the new supply dynamics, DTI said it must initiate similar protocols limiting gas received in the north for delivery in the south.

The supply shift has been significant in the few years since the Marcellus production accelerated. In 2011, DTI received about 25 million Dth in the north. “Today, less than three years later, we’re at over 350 million Dth being received, 14 times what we received three years ago,” Kienle said.

Trading into DTI had already been turned on its head before the recent storage issues because of burgeoning production from the Marcellus Shale. Dominion used to trade at a consistent premium to the Henry Hub, but it has traded at a negative differential to Henry since May 2013. That negative basis has blown out in recent months, moving from minus a nickel in May and June 2013 to nearly minus $1 in January 2014.

While production has accelerated, drilling activity in the Marcellus Shale has remained fairly level over the last year. According to Baker Hughes, there were 86 rigs at work in the Marcellus for the week ending Jan. 24, down one from the previous week and five fewer than the corresponding week a year ago.

The recent polar vortex underscored the need for gas limits, DTI said. Jan. 6-8 was the coldest period in DTI’s market area since early 1994, forcing restrictions in Ohio and Central markets for the first time in the company’s operating history. And voluntary responses during the cold snap “fell far short of DTI’s receipt requirements at southern interconnects,” the company said.

DTI has expanded the use of southern storage to augment flows from north to south, but that support can no longer continue.

Beginning Feb. 1, or earlier if operations dictate, DTI said it will institute one or more of the following actions:

As a reference point, DTI said the allocation would have impacted 300,000-600,000 Dth/d if it had been implemented in January.

Separately, prompted by two compressor units going down Jan. 22-23 at its Borger station in Tompkins County, NY, Dominion on Thursday evening issued a force majeure advisory. By Friday morning, unit 2 at the station was back in service; unit 4 remained down, according to Dominion.