Detroit’s DTE Gas is ramping up its efforts in going green, joining its parent company with a goal to achieve net zero carbon emissions by 2050. 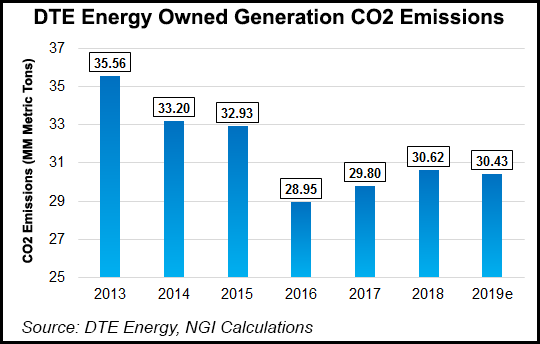 The greenhouse gas (GHG) reduction goals, an expansion of DTE Energy Co.’s 2018 ambitions to reduce methane emissions by 80%, include partnering with customers to address up to 100% of the natural gas carbon footprint with programs that encourage energy efficiency and participation in a voluntary emissions offset program. The roadmap to achieve net-zero emissions also would include suppliers and the gas unit’s operations.

The company’s net zero commitment is to reduce annual GHG emissions by more than 6 million metric tons by 2050, which it said is equivalent to offsetting emissions of one million homes or taking 1.3 million cars a year off the road.

“Climate change is one of the defining public policy issues of our time and it demands a bold response,” said DTE Energy CEO Jerry Norcia. “The level of impact urgently needed can only be achieved by viewing the challenge through a holistic lens, bringing our suppliers and our customers on the journey with us. This is the right plan for our environment, for our customers and for our communities.”

As part of the three-fold approach, DTE Gas would require its suppliers to operate at net zero GHG emissions by 2050. As the American Gas Association and Edison Electric Institute are working to standardize emissions reporting within the industry, spokesperson Colleen Rosso said DTE is following up with criteria in which, all else being equal, carbon intensity could be a deciding factor in purchasing decisions.

“We’ll build experience and ultimately formalize this goal into our buying criteria with approval from the Michigan Public Service Commission,” Rosso told NGI in an email.

The DTE Gas business would include operational improvements and carbon offsets as it continues to deliver natural gas to its 1.3 million customers in Michigan. The company’s current main renewal program and infrastructure modernization efforts would reduce both methane and combustion-related emissions from operations.

In addition, DTE plans to invest in a combination of renewable natural gas (RNG) and carbon offsets, such as biosequestration, the process of capturing and storing carbon in living organisms such as trees.

By including suppliers and customers in its plan to achieve net-zero status, “DTE’s plan reflects the proactive thinking that is necessary to combat climate change and ensure a sustainable future for our state,” said state Rep. Christine Greig.

To achieve its goal, Ford plans to focus initially on three areas that account for around 95% of carbon dioxide emissions — vehicle use, supply base and facilities. Ford set the 2050 goal “fully aware of challenges,” including customer acceptance, government regulations, economic conditions and the availability of renewable power and fuels.

“We can develop and make great vehicles, sustain and grow a strong business and protect our planet at the same time — in fact, those ideals complement each other,” said Ford Vice President Bob Holycross, chief sustainability, environment and safety officer. “We don’t have all the answers yet but are determined to work with all of our global and local partners and stakeholders to get there.”

Ford is working to develop goals approved and defined by scope 1, scope 2 and scope 3 emissions, which cover direct, indirect and customer emissions.

The automaker previously announced its plan to use 100% locally sourced renewable energy for all its manufacturing plants globally by 2035.