Driven by a sharp pullback in the Permian Basin, the U.S. rig count dropped five units to 760 for the week ended Friday (Sept. 2), according to the latest tally from oilfield services provider Baker Hughes Co. (BKR). 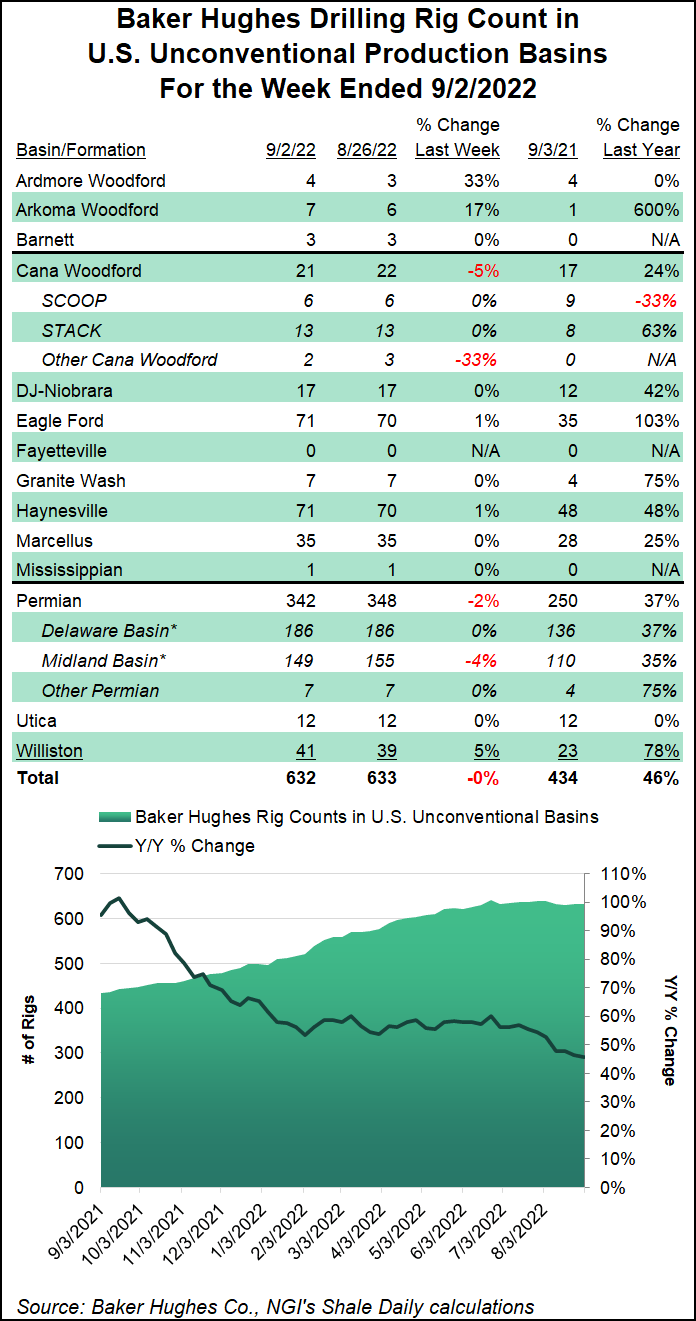 Net changes domestically for the week included a nine-rig decline in oil-directed drilling, partially offset by a four-rig increase in natural gas-directed rigs. The combined 760 active U.S. rigs as of Friday compares with 497 rigs running in the year-earlier period, according to the BKR numbers, which are partly based on data from Enverus.

The Canadian rig count, meanwhile, increased by seven units — all oil-directed — to climb to 208, up from 152 in the year-earlier period.

In terms of changes by drilling region, the Permian posted a six-rig decline week/week, lowering its total to 342. That’s up from 250 at this time last year, the BKR data show.

Elsewhere among plays, two rigs were added in the Williston Basin for the week, along with one rig each in the Ardmore Woodford, Arkoma Woodford, Eagle Ford Shale and Haynesville Shale. The Cana Woodford posted a one-rig decline week/week.

Counting by state, the Texas rig count dropped nine rigs to 362 for the period, versus 232 a year ago. New Mexico and North Dakota each added two rigs to their respective totals.

U.S. crude production ticked up in the week-earlier period, approaching a 2022 high, keeping pace with an increase in demand for travel fuels, the U.S. Energy Information Administration (EIA) said in its latest release of weekly petroleum data.

After a choppy mid-summer run on the demand front amid lofty gasoline prices, consumption was seen stabilizing in late August and may rise into the early fall, according to analysts at Evercore ISI. Prices at the pump have fallen substantially from record highs earlier this summer – down more than 20% from June 14 to around $3.40/gallon on Wednesday.