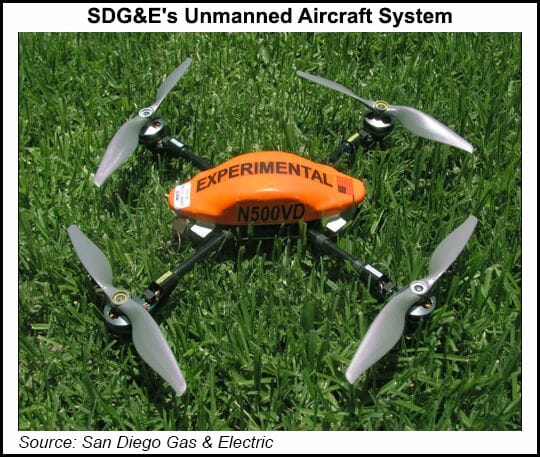 “The plan is to use them on all infrastructure — gas and electric,” said an SDG&E spokesperson. “As far as the testing is currently going, they have only been tested on electric lines so far.”

The 16-inch diameter drones weigh less than a pound and are equipped with cameras. They cost about $6,000 each, and SDG&E has 10 in its fleet so far, only two of which have been approved by the FAA.

“Any drone we wish to fly has to be approved with the FAA before using it,” the utility spokesperson said. “The other eight drones are currently undergoing FAA review.”

SDG&E and other major utilities around the nation plan to integrate the small UAS aircraft into day-to-day operations that will enhance the effectiveness of their gas and electric line inspections, particularly in inaccessible areas or those off-limits to helicopters.

In addition to the monitoring and maintenance, the drones have the potential to be used in other situations encountered frequently by the utilities, including power outages, fires and other emergencies.

With the ability to relay real-time images back to controllers, the drones can improve what situational awareness during emergencies, leading to cost savings, noise reductions and environmental protection.

Strict federal regulations for drone operations may present some obstacles, however. FAA rules, for example, require drone operators to be licensed pilots or have specialty training. They must keep the unmanned aircraft within eyesight and below 400 feet in altitude.