Fueled by bursts in energy costs, including natural gas, U.S. inflation spiked to an 8.6% annual rate in May, reaching the highest point in more than 40 years. 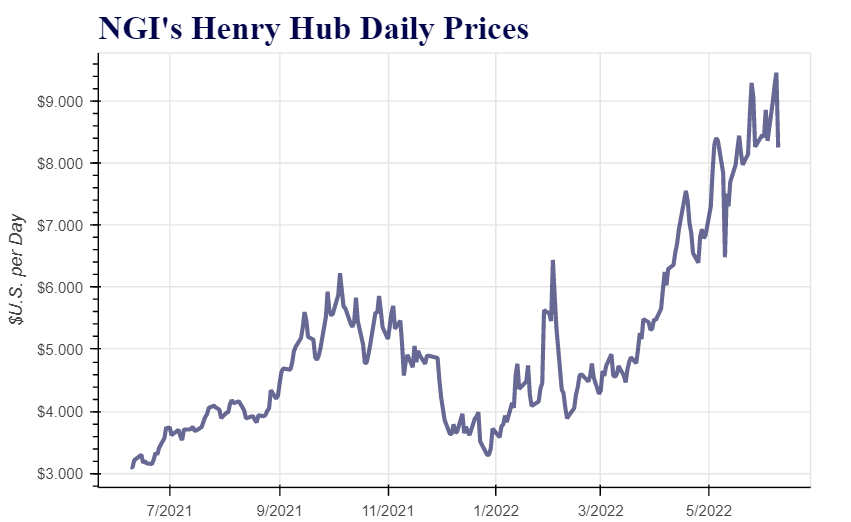 The U.S. Department of Labor on Friday said its Consumer Price Index showed energy costs overall last month climbed 35% from May 2021. Energy commodities, a subcategory including oil and gas, soared 50% year/year and led the upward charge.

Natural gas prices in May reached the highest level in 14 years – and did so again this month – amid fears of a global supply squeeze induced by Russia’s war in Ukraine. Europe, already low on gas in storage prior to the war, is now working to wean itself from Russia supplies in opposition of the conflict. Countries across the continent are looking for U.S. exports of liquefied natural gas (LNG) to help fill the void, intensifying global competition for precious American supplies and putting upward pressure on prices.

The Energy Information Administration (EIA) on Thursday reported a 97 Bcf injection of gas into Lower 48 storage during the week ended June 3. The build lifted stocks to 1,999 Bcf, yet supplies in storage remained 14.5% below the five-year average heading into the peak cooling demand season.

“Barring some major new development that cuts off global demand, it’s hard to see prices coming down much this summer – if at all,” U.S. Global Investors’ Mike Matousek, head trader, told NGI.

To be sure, an explosion on Wednesday at the Freeport LNG export terminal left market participants contemplating potential demand destruction through June that could provide storage a boost. It likely would not be enough to ease long-term supply challenges, analysts said.

“While we await further color on timing of restart in the coming weeks, incremental storage to our end-of-season balances in the 3.2 Tcf range” keeps the storage trajectory “historically tight and will keep us from throwing in the towel on the positive risk/reward setup for the time being,” analysts at Tudor, Pickering, Holt & Co. (TPH) said.

Western sanctions against the Kremlin’s energy complex – including U.S. and European embargos on Russian oil imports – ignited concerns that global supply may trail demand through the year.

International benchmark Brent crude prices – already trading above $120/bbl in June, up about 50% in 2022 — will average $140/bbl between July and September and hover around that level through the first half of next year, analysts at Goldman Sachs Group analysts forecast.

The recent bans on Russian oil could affect about 3.0 million b/d, according to the International Energy Agency.

While some of that oil will land in China and elsewhere in Asia, Russian production is expected to fall by 1.0 million b/d by year’s end from 10.8 million b/d in May, the Goldman team said. The United States and OPEC have increased output this year, but at a modest pace. Should that continue, the analysts estimated the global supply deficit still would be about 400,000 b/d in the third quarter, supporting the lofty price prediction.

Companies that had soured on the oil and gas sector are now rethinking their plans, Matousek said.

A case in point: Citing high prices, Tulsa-based Unit Corp. on Friday said it called off the planned sale of its oil and gas properties and reserves to TPH.

The decision “reflects the opportunities created by rising oil and natural gas prices” and a “conviction that the company can create more shareholder value by operating the properties,” Unit CEO Philip Smith said.

Still, inflation is impacting energy companies’ expense profile, and those in the industry are sounding alarms similar to those ringing across the economy. Many oil and gas producers said throughout the recent 1Q2022 earnings season that they are burdened with high fuel expenses, in addition to rising costs for everything from staff to equipment to materials.

The Federal Reserve, meanwhile, is in the midst of an interest rate increase effort. It twice raised rates in the spring. Futures markets widely expect more rate hikes this summer.

The European Central Bank this month said it would raise interest rates in July for the first time in 11 years. It plans another rate hike in September.

Higher rates make borrowing more expensive and, by extension, can taper spending and cool inflation. Still, in such an environment, Matousek said, companies also often grow cautious about investments – worried that rates may rise too high, too fast and drive the economy into recession.

Given that possibility, he added, it may be difficult for exploration and production companies to ramp up output of oil and gas substantially this year, leaving imbalances and inflationary pressure on energy commodities.

Managing director Mike Gibbs at Raymond James Financial offered a similar assessment. He said with “inflation uncertainty high” and the Fed “in tightening mode,” companies may “err on the defensive side for the short-term.”