Energy-related carbon dioxide (CO2) emissions in the United States decreased in 2015 and were 12% below 2005 levels, according to a note published Monday by the Energy Information Administration (EIA). 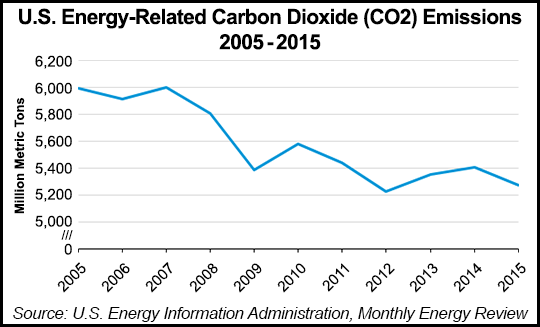 The CO2 emissions reductions in 2015 were driven by changes in the power sector, EIA said. Low commodity prices saw power burn increase substantially in 2015, and gas overtook coal as the leading fuel for U.S. electric generation in the second half of the year (see Daily GPI, Dec. 28, 2015).

“Many of the changes in energy-related CO2 emissions in recent history have occurred in the electric power sector because of the decreased use of coal and the increased use of natural gas for electricity generation…Overall, the fuel-use changes in the power sector have accounted for 68% of the total energy-related CO2 reductions from 2005-2015,” EIA said.

The lowest U.S. energy-related CO2 emissions in the past decade came in 2012, followed by increases in 2013 and 2014 before emissions declined again last year, according to EIA. Natural gas power burn saw an uptick in 2012 corresponding with a decline in commodity prices, which fell below $2/MMBtu Henry Hub in April of that year, according to NGI’s spot prices.

Two primary factors affecting changes in U.S. energy-related CO2 emissions have been weather and the economy, EIA said, though economic growth has decoupled somewhat from CO2 emissions in recent years.

While the largest annual decline in CO2 emissions coincided with the recession in 2008 and 2009, the economy has grown since 2005 even as emissions have declined, EIA said.

“Adjusted for inflation, the economy in 2015 was 15% larger than it was in 2005, but the U.S. energy intensities and carbon intensities have both declined,” EIA said. “On a per-dollar of gross domestic product (GDP) basis, in 2015, the United States used 15% less energy per unit of GDP and produced 23% fewer energy-related CO2 emission per unit of GDP, compared with the energy and emissions per dollar of GDP in 2005.”

Even as increased burning of natural gas has helped drive a decrease in U.S. CO2 emissions, the Obama administration has been moving forward on what analysts have described as an “unprecedented” list of regulations targeting the oil and gas industry (see Daily GPI, April 25).