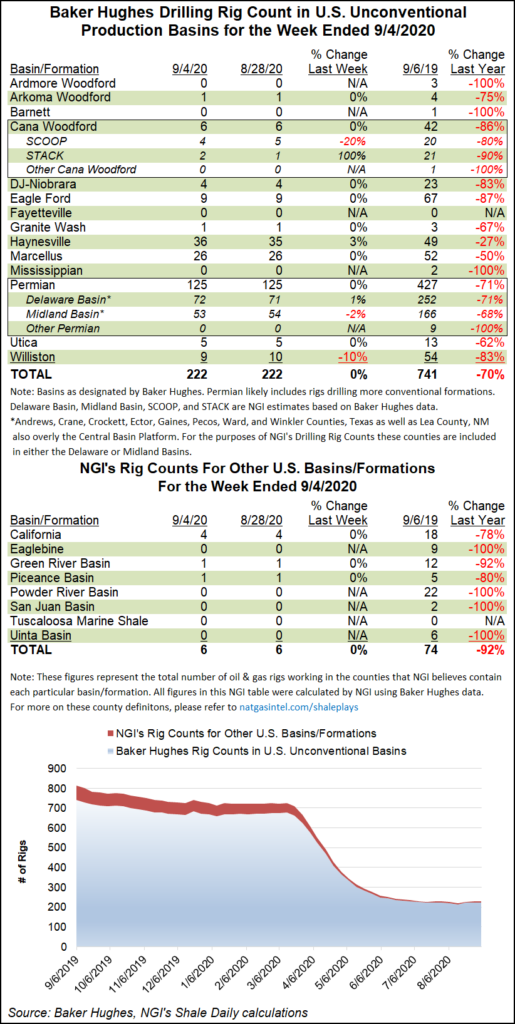 The U.S. rig count gained two units to reach 256 for the week ending Friday (Sept. 4), putting the domestic tally on a modest uptrend over the past month, the latest data from Baker Hughes Co. (BKR) show.

The United States added one oil-directed rig and one miscellaneous rig during the week, while natural gas-directed drilling remained unchanged at 72 rigs, according to BKR.

The Covid-19 pandemic decimated drilling activity earlier this year, but the U.S. count has now added 12 rigs since bottoming at 244 during the week ending Aug. 14. The 256 active U.S. rigs as of Friday still represents a sharp decrease from the 898 rigs running in the year-ago period.

Land drilling remained unchanged overall during the period, while the Gulf of Mexico added two rigs to grow its total to 15. Three vertical units were added, offsetting the departure of one horizontal rig.

The Canadian rig count dropped two units — both gas-directed — to end the week at 52, versus 147 in the year-ago period.

The combined North American rig count ended the week unchanged at 308, versus 1,045 at this time last year.

There were no large week/week changes among major plays, according to BKR data. The Haynesville Shale picked up one rig on the week to finish with 36 rigs, versus 49 in the year-ago period. The Williston Basin dropped one rig to fall to only nine active units, down from 54 at this time last year.

Among states, Louisiana added three rigs overall, while New Mexico added one. North Dakota and Texas each dropped a rig from their respective totals, according to BKR.

BKR also released its latest international rig count Friday. Active rigs across Latin America, Europe, Africa, the Middle East and the Asia Pacific rose to 747 as of August, up from 743 in July. That’s a decrease of 391 from August 2019, when BKR tallied 1,138 active international rigs.