The Delaware River Basin Commission (DRBC) has no plans to lift its moratorium on natural gas drilling anytime soon in the 13,539-square mile watershed that it oversees, reassuring opponents of development at a packed meeting on Wednesday that deliberations are continuing. 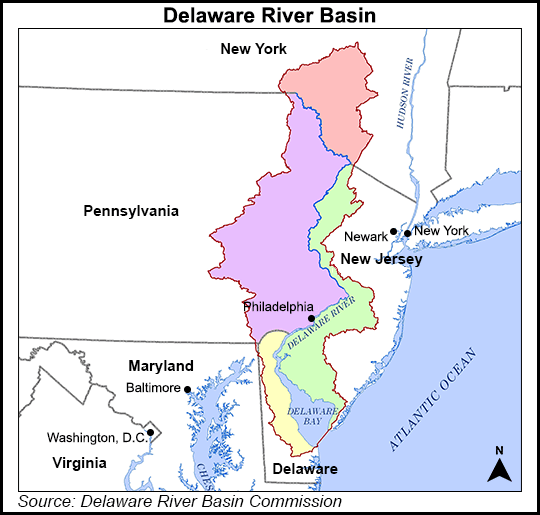 While it hasn’t received or processed any applications for natural gas development projects in years, the Marcellus Shale underlies about 36% of the Delaware River Basin, which includes parts of Northeast Pennsylvania where shale producers are active. The DRBC decided in 2009 that all gas drilling in the basin needed to be reviewed, saying it would not approve any development until it adopted new rules governing the industry. Draft regulations were issued in 2010 and revised and published the following year, but the commission has failed to act on adopting the rules, leaving in place a de facto moratorium.

“There are no current plans to take a vote on the draft rules that were published in 2011,” said Lt. Col. Michael Bliss of the U.S. Army Corps of Engineers, which is the commission’s federal representative. “Any new or continued rulemaking initiated by the commission would be subject to further public notice and comment.”

Bliss made his comments at the DRBC’s quarterly business meeting on Wednesday. According to local news media reports, more than 200 opponents of natural gas development attended the meeting among growing concerns that the commission would soon move forward with lifting the ban.

The DRBC faces a lawsuit from the Wayne Land and Mineral Group (WLMG) in the U.S. District Court for the Middle District of Pennsylvania. WLMG is arguing that the DRBC is impeding development of private land and appeasing environmental groups opposed to oil and gas produced by unconventional development. Its lawsuit claims the commission also lacks authority under the Delaware River Basin Compact to review and approve natural gas production related activities.

The U.S. Congress approved the compact — an agreement among the United States, New York, Pennsylvania, New Jersey and Delaware — in 1961 to better protect the Delaware River watershed. Pennsylvania is a member of seven other interstate river basin organizations.

The DRBC has concerns about the effect of drilling on water resources. Bliss stressed that regardless of the moratorium, the DRBC continues to spend “extensive time and effort” on matters relating to the regulation of natural gas development.

WLMG filed its lawsuit in May 2016, and the case continues to drag on. The Delaware Riverkeeper Network, an environmental organization that has long been opposed to shale development, was granted intervenor status as a defendant in the case late last year. The DRBC notes on its website that it will not comment on the pending litigation.

WLMG owns about 75 acres of land in Wayne County, PA, that are within the river basin. The company acquired the property in 2015 with an intent to explore for, extract and sell natural gas from shale formations underneath the property, according to its lawsuit.