A major flip in weather models last weekend turned the natural gas forward markets on their head as a substantial increase in the expected intensity of medium-range cold lifted December prices by an average 39 cents from Nov. 1 to 7. January rose by an average 38 cents, while the balance of winter (January-March) climbed by an average 31 cents, according to NGI’s Forward Look. 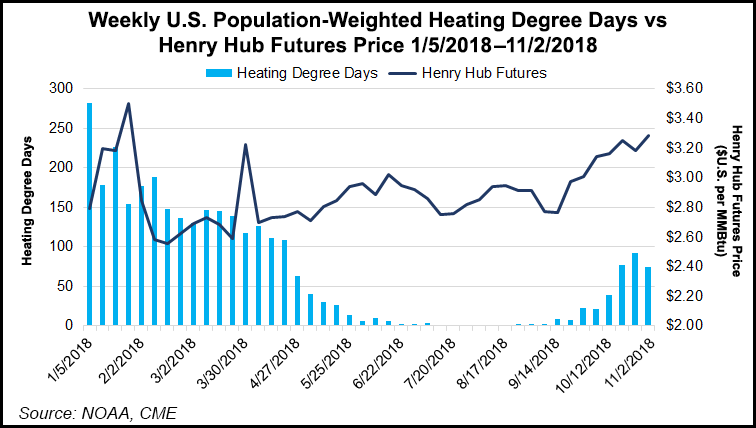 Nymex futures led the rally as the December contract started off Monday’s session nearly 20 cents higher than Friday’s close as forecasts showed above-average gas-weighted degree days beginning Friday and continuing through Nov. 18, with heating demand expected to peak around Nov. 14, according to Bespoke Weather Services. The prompt month went on to settle that day some 28 cents higher day/day at $3.567.

Warmer risks for the latter part of November stalled the futures rally in the days since even as overnight Wednesday weather models were a little colder for next week. By Wednesday, the prompt month had barely slipped to $3.555 and then slipped another 1.2 cents on Thursday to $3.543.

The latest weather outlooks showed colder-than-normal temperatures pouring across the Plains, Great Lakes and east-central United States during the next couple days. With lows behind the cold front expected to drop into the teens to 30s — and locally single digits near the Canadian border — national demand was projected to quickly increase to above normal, according to NatGasWeather.

Colder air was forecast to push through the East this weekend, leading to further increases in national demand, and then reload over South Canada before rapidly advancing early next week down the Plains and into Texas, then across the Great Lakes, Tennessee Valley and East, the forecaster said. This weather system trended colder in the overnight data for much stronger-than-normal national demand, as overnight temperatures were expected to fall into the 30s even across the South and Southeast.

For the gas market, the jolt higher in prices reflects the fact that weather models struggled to pick up on this cold shift until the weekend, representing a step change higher in near-term demand, according to EBW Analytics. After such a large weather forecast shift, it would not be surprising if further notable adjustments or revisions were to occur, potentially driving near-term price fluctuations, the firm said.

Notably, however, late November and early December forecasts remain bearish. The latest weather models all showed milder temperatures gaining ground across much of the country Nov. 18-22, especially the Global Forecasting System (GFS) model that had been much colder on the pattern compared to the rest of the data the past two days, according to NatGasWeather.

“The data is all over the place on whether cold can return across the Great Lakes and East Nov. 22-24, but with more to prove,” NatGasWeather said. The GFS remained colder than the rest of the data in midday runs on Thursday, but was not as impressive for the Nov. 20-22 period compared to recent days.

“We need to be careful here as there are ways colder trends quickly show back up in the data Nov. 20-25 based on the Northern Hemispheric pattern,” NatGasWeather said. “But for the markets to totally buy in, the European model would need to show better potential since it’s been quite mild with the set-up.”

EBW agreed that there was potential for colder swings in the weeks ahead as Pacific Ocean temperatures remain favorable for additional cold events, and weather patterns have shown increased persistence in recent years.

For now, the extended cold blast on tap through next week was expected to put an abrupt end to storage injections, which stood at 3,143 Bcf at the end of October. While the Energy Information Administration (EIA) on Thursday reported a surprising 65 Bcf injection that lifted inventories to 3,208 Bcf and reduced inventory deficits by more than expected, the recent surge in winter-month gas prices demonstrates the power of cold weather — even more than two months before the winter peak — to exert a domineering effect on the market, according to EBW.

“Although a storage squeeze remains very unlikely, two more shifts as seen over the past weekend could reduce end-of-season storage below 1,100 Bcf, and begin to make a storage squeeze a real possibility,” Weissman said.

Still, EBW projects that a warm shift will occur at some point later this winter and will lead to lower prices later in the season, which occurred in both winter 2014-15 and winter 2016-17. “While gas prices may explode higher in a very cold winter outcome, the most likely outcome is for prices to gradually decline after the market is able to sufficiently discount the possibility of any storage squeeze this winter. In both 2014-15 and 2016-17, prices rose early in the winter on cold weather, only to give back gains in the second half of winter,” Weissman said.

Weather aside, market observers continue to talk up record gas production and expect further supply growth to reduce the importance of having inventories at historic levels. According to the EIA’s latest Short-Term Energy Outlook, total U.S. dry natural gas production climbed to 86.9 Bcf/d in October, up 0.7 Bcf/d sequentially. For the year, EIA expects production to average a record-high 83.2 Bcf/d, with production expected to climb in 2019 to an average 89.6 Bcf/d.

Year/year dry gas output growth now stands at a hair above 10.8 Bcf/d. Over the past 18 months, dry gas output has increased an astounding 13.4 Bcf/d (19%), according to EIA. “Already, the growing supply/demand imbalance can be seen in the storage trajectory; with more production flowing on a real-time basis, there is less need for the market to rely on stored gas inventories to meet demand,” Weissman said.

The key question now is whether the market has judged the production surge appropriately, according to EBW. With lower storage inventories — and a lower March exit projected — the market is more susceptible to sharp price volatility this winter, should extreme weather materialize, the firm said.

Particularly in a cold-weather scenario, production freeze-offs could imperil the current market strategy of relying on production rather than inventories. “With increasing production driven by associated gas — with liquids-heavy wells more susceptible to freeze-offs — the market may suddenly find an increased call on production at the same time that output is unavailable. Should this occur, prices could skyrocket,” Weissman said.

Meanwhile, other factors are quietly providing additional background market support, including increases in liquefied natural gas (LNG) feed gas deliveries. Sabine Pass and Cove Point are essentially “running on all cylinders” and Corpus Christi is now taking more than 100,000 MMBtu/d, according to Mobius Risk Group. The latter Cheniere Energy Corp.-owned facility is expected to send out its first cargo by year’s end, and recent updates from Sempra Energy Corp. suggest that the first train at Cameron LNG could be online shortly thereafter, the firm said.

“This fundamental factor coupled with the current storage deficit are enough to offset the bulk of projected domestic production growth. As a result, colder-than-normal weather should continue to provide asymmetrical price risk versus similar magnitude warmth,” Mobius analysts said.

Also underpinning the recent upward reset of Nymex price support are steady increases in baseload power consumption. This past summer saw coal retirements in Texas fuel a stable source of new natural gas demand, and next year will see a similar trend in Florida, according to Houston-based Mobius.

With demand set to hit peaks that are not typical for this early in the season, forward prices across the East and Appalachia staged rallies that lifted December prices by more than 50 cents at several points and by as much as 71 cents in New England.

Indeed, the key demand region remains entrenched in seasonal maintenance as multiple nuclear outages for refueling and gas pipeline maintenance events continue in the runup to winter, resulting in a more pronounced response to colder weather. The early spike in demand, projected by Genscape Inc. to jump by more than 1 Bcf/d day/day to 3.16 Bcf/d for Thursday, sent Algonquin Citygate December prices up 71 cents from Nov. 1-7 to reach $8.60, according to Forward Look. January jumped more than $1 to $12.60, and the balance of winter (January-March) rose 79 cents to $10.49. For reference, prices last winter averaged $7.62.

Over in the Rockies, Northwest Sumas posted the largest gains across North America as the market continues to cope with cuts to imports from Canada following the Oct. 9 explosion on Enbridge Inc.’s Westcoast Transmission. While Alberta was the first to bear the brunt of the cold system, the cold is now extending southward into the pipeline-constrained Pacific Northwest.

Demand in the region was above 2.1 Bcf/d on Wednesday and expected to continue climbing to a high near the 2.4 Bcf/d mark early next week, according to Genscape. Still, the colder temperatures and that level of demand are “not terribly outstanding.” Rather, “the region is being forced to make up for lost volumes from British Columbia through increased imports from the Rockies, Alberta (at times) and storage withdraws,” Genscape senior natural gas analyst Rick Margolin said.