On a day in which Gov. Jerry Brown delivered his state-of-the-state address with no mention of energy or regulations, California’s agency overseeing oil and natural gas on Thursday released draft rules covering the use of water, steam and underground storage in oil/gas activities. 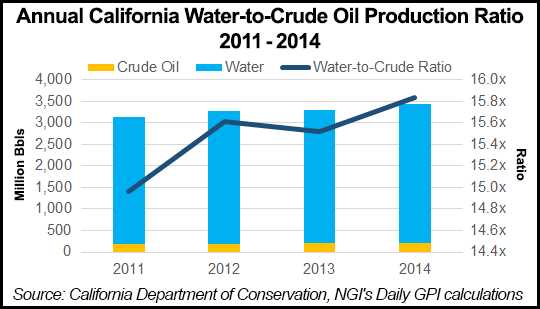 California’s Department of Conservation (DOC) and its Division of Oil, Gas and Geothermal Resources (DOGGR) opened the public comment period for proposed rules for controlling the use of water and steam in oil/gas production, along with separate rules to increase the safety of underground natural gas storage. The latter is in response to a three-month-old storage well leak in Southern California (see Daily GPI, Jan. 19).

While the emergency storage rules are effective, over the next 12 months DOGGR will carry out an expedited rulemaking process to establish new permanent regulations. This will remain separate from the efforts to modernize and improve California’s requirements for all types of oil/gas injection activities under the state’s underground injection program, under which the draft rules released Thursday are included.

Comments on the proposed approaches will be accepted by DOC staff through Feb. 19. These initial comments are preliminary to separate formal rulemaking processes that will include an updated set of draft rules for both oil/gas steam and water use and gas storage operations.

“The draft rules released [now] are intended to address shortcomings in the state’s underground injection control [UIC] program identified by the U.S. Environmental Protection Agency [EPA] and also to modernize and improve the rules that protect public health and safety and the environment,” said a DOGGR spokesperson (see Shale Daily, Feb. 17, 2015).

Based on the state’s geology, California oil/gas drilling yields far more water than fuel: 205.3 million bbls of oil in 2014 yielded 3.3 billion bbls of water. The naturally brackish produced water can’t be used for human consumption without being treated. Typically, this water is injected back into the reservoir from which it came to provide enhanced oil recovery (EOR) or to maintain reservoir pressure to prevent subsidence at the surface around wells.

DOGGR regulates injection wells that inject superheated steam, water or other fluids into formations to extract minerals under the UIC program, which ultimately is monitored by the U.S. EPA.

California oil/natural gas regulators last summer outlined details of its new UIC program in a submittal to the EPA. The action marked the second of many milestones the state is committed to under a 24-month review of the UIC program, DOGGR officials said (see Shale Daily, July 21, 2015).

In addition to the governor and the ongoing storage well leak, DOC’s Harris said the DOGGR “renewal plan” released last year addresses a number of state oil/gas regulatory issues, including the UIC program. Viewed as a state oil/gas regulatory agency overhaul, the plan covers new regulations to recognize a new set of realities driven by climate change, modernized data management, and a stepped up effort to ensure a high quality future oil/gas workforce in state service.