The Dow Chemical Co. has begun commissioning an enhanced polyethylene production facility in Freeport, TX, one component of a major buildout to take advantage of abundant shale natural gas in the region. 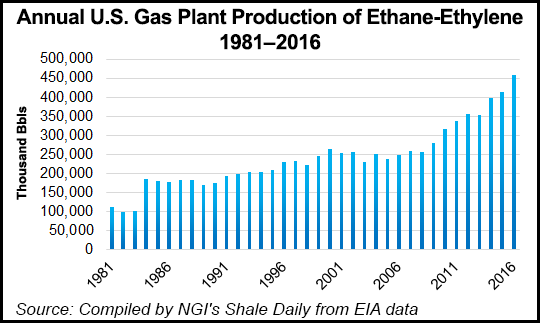 The 400,000 metric ton unit is the first of four derivative investments at Dow manufacturing sites in Texas and Louisiana, which are part of a $6 billion expansion on the Gulf Coast. Last month Dow launched a five-year, $4 billion petrochemical buildout, mostly for U.S. projects that include adding a 600,000 metric ton polyethylene unit on the Gulf Coast and expand a new Texas ethylene cracker to create the largest facility of its type in the world.

“This milestone further reflects the steady progress our teams are making to bring these multi-phased investments online to enhance our cost-advantaged integration and industry-leading innovation,” said CEO Jim Fitterling. “Taken together, these investments represent the industry’s broadest and most differentiated derivative slate…”

The production unit has begun the commissioning and start-up phase in sequence with the mid-year start-up of Dow’s 1.5 million metric ton world-scale ethylene facility. The plant is expected to ramp up during the third quarter and be fully operational in the fourth quarter.

The polyethylene produced would be used in flexible packaging applications for food, personal hygiene products and industrial packaging. Dow’s other three derivative units along with a planned debottlenecking project are proceeding on schedule and are staged to come online through 2018.