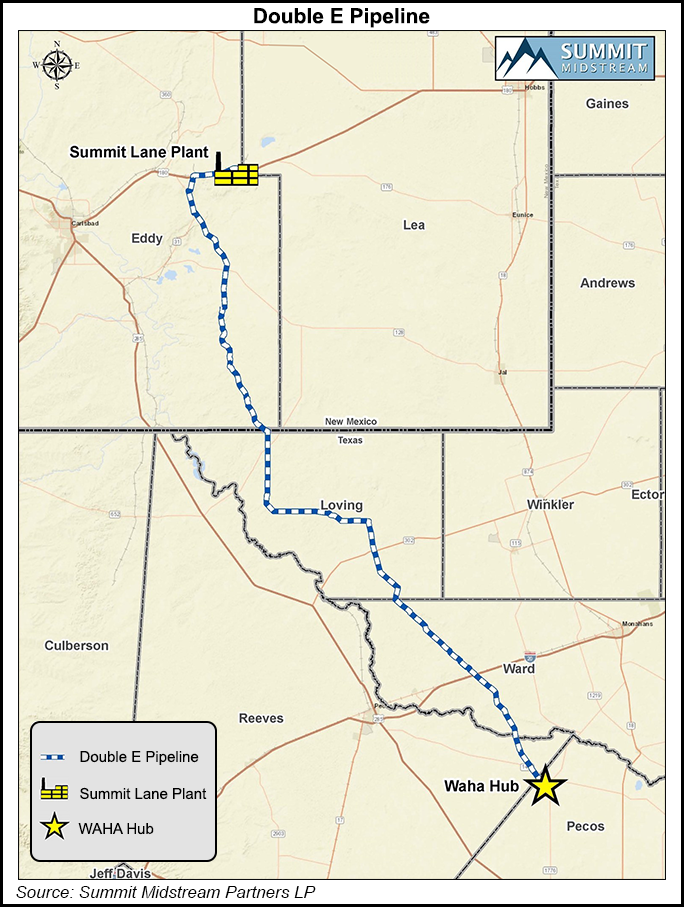 The Double E project would offer firm transportation service from producing areas in the Delaware sub-basin in southeastern New Mexico and West Texas to delivery points near the Waha hub.

Project backer Summit Midstream Partners LP expects to secure a notice to proceed with construction within three months. The company is awaiting a right-of-way approval from the Bureau of Land Management and needs to file an implementation plan with the Federal Energy Regulatory Commission.

Receiving the FERC certificate “is an important milestone in the development of the Double E Pipeline Project,” Summit CEO Heath Deneke said. “…We are in the process of finalizing third-party financing for substantially all” of Summit’s remaining capital obligations for the project, “and we expect to secure financing concurrently with receipt of FERC’s notice to proceed with construction.”

Commissioner Richard Glick dissented on the decision, once again calling on the agency to go further in acknowledging the climate-related impacts of projects under its review.

Through its “refusal to assess” the potential harm of the project’s contribution to climate change, the commission “misleadingly” stated it would not significantly harm the environment, Glick said.

“That failure forms an integral part of the Commission’s decision making: The refusal to assess the significance of the project’s contribution to the harm caused by climate change is what allows the Commission to misleadingly state that approval of the project ‘would not constitute a major federal action significantly affecting the quality of the human environment’” as part of the basis for a finding of public convenience and necessity.

The Democratic commissioner also criticized the majority for failing to “seriously consider the need for the pipeline” in its decision, arguing that FERC’s needs assessment is “based almost entirely on the existence of a precedent agreement” between affiliated entities. Agreements between affiliates are “less probative” of the need for a pipeline “because they are not necessarily the result of an arms-length negotiation,” he argued.

In other business, the Commission approved an amendment to the certificate for Port Arthur Pipeline LLC’s Louisiana Connector Project. Under the amendment proposal, Port Arthur would add three interconnections and relocate a previously approved compressor station and interconnection. Glick dissented in part on that order as well.