Canada’s top natural gas transmission and distribution companies have concluded a deal to pave the way for growing imports of shale gas supplies from the United States into Ontario and Quebec over at least the next 16 years. 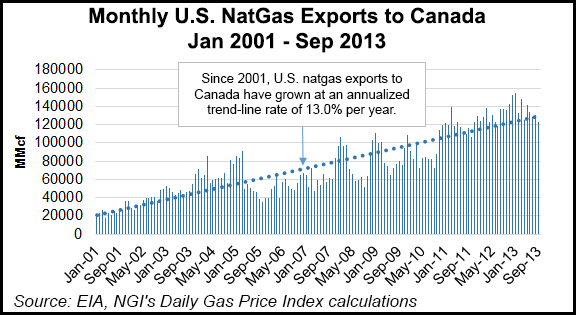 The companies presented the package to the National Energy Board (NEB) just before Christmas, to seek regulatory approval in time for construction of two projects scheduled to go into service in 2015 and a third one intended to begin deliveries in 2016.

Preparations for the additions have been under way since November, when TransCanada started formal open-season negotiations with prospective shippers on transportation service contracts.

Bookings of up to 1 Bcf/d in new capacity for Ontario and Quebec are expected to be complete early in 2014. U.S. exports to Canada already average more than 2.7 Bcf/d after growing rapidly since 2008, according to trade records kept by the U.S. Department of Energy (see Daily GPI, Sept. 23).

The agreement pledges co-operation on facilities, services and tolls by TransCanada, Enbridge, Union and Gaz Metro through 2030. Provision is made to extend the collaboration, depending on market developments.

The 94-page Christmas filing with the NEB fleshes out an October agreement on principles for a new gas order that ended months of hot regulatory dueling between the distributors and TransCanada. Disputes boiled over into the Ontario law courts, where TransCanada sued Enbridge for C$4.5 billion (US$4.3 billion) for allegedly breaking a previous agreement to refrain from building bypasses around the long-distance gas transmission network.

The mid-2013 fight in turn grew out of fights over TransCanada financial and services restructuring plans that ended in an NEB toll ruling that cut the benchmark Alberta-to-Ontario toll on its Mainline in half to C$1.42 per gigajoule (US$1.40/MMBtu). The decision rejected TransCanada proposals to make the western supply side of the gas market cover costs of excess Mainline capacity caused by shrinking Alberta production and rising imports from the U.S. into Ontario and Quebec.

The NEB, supported by western producer interests, ordered the long-distance toll cut as a strategy for refilling the Mainline. Simultaneously, the board directed TransCanada to make new arrangements for short hauls of U.S. gas into Ontario and Quebec, a service territory known as the transmission network’s Eastern Triangle region.

TransCanada issued a reminder Monday that its open season for firm capacity in the Mainline triangle segment, from North Bay, Toronto and Montreal will continue to run through Jan. 15. New capacity will be constructed depending on shipper interest. The new service will ensure sufficient capacity for gas shippers when TransCanada transfers a portion of the mainline over to oil service under its Energy East program (see Daily GPI, Dec. 2).

The filing on the new agreement warns the NEB that yet more regulatory quarrels likely lie ahead when the board devises an approval procedure. “TransCanada expects the settlement to be supported by shippers that represent the majority of Mainline revenues, but to be contested by a limited number of parties.”

Attempts to obtain unanimous consent from a mini-parliament of shippers known as the Mainline Tolls Task Force failed, TransCanada said. Western producers and the Alberta government, which historically relied on eastern gas sales as a prime source of royalties from provincially owned resources, have yet to take public positions on the proposed new regime.

For purposes of services and tolls, the settlement divides the TransCanada network into separate segments. From the Alberta point of view the proposed new regime discards the founding 1950s vision of TransCanada as a government-supported instrument of national energy self-sufficiency, binding Ontario and Quebec to western supplies.

The Ontario Energy Board and its Quebec counterpart have encouraged the distributors to obtain a new deal from TransCanada that increases access to U.S. production. Quebec’s board last year switched the official pricing point for Gaz Metro away from TransCanada’s Nova grid in Alberta and over to the Dawn storage and trading point in southwestern Ontario, where import lines from the U.S. converge.

Gaz Metro alone is forecast to cut its annual gas costs by C$88 million to $120 million (US$83-114 million) by diversifying procurement off traditional reliance on the Western Canada Sedimentary Basin, primarily Alberta.

The package is studded with intricate formulas for distributing costs of western Mainline excess capacity and additions to the Eastern Triangle crowded gas pipelines. Settlement commitments include pledges by TransCanada to kick in C$120 million (US$114 million) in after-tax income and by the Ontario and Quebec distributors to make a variable “bridging contribution” over the next six years.

The new era of open access to competitive U.S. gas from the Marcellus and Utica shale formations shows in a second proposed new TransCanada service called “enhanced market balancing,” which will let shippers have eight “nomination windows” for capacity bookings every day.