The majority of interest in Mexico’s energy sector reforms has focused on oil and gas exploration and production, but there will continue to be investment opportunities in the natural gas midstream sector as well, according to consultancy ICF International. 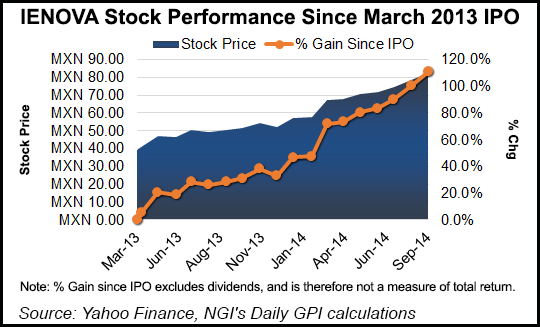 Reforms will allow private sector investment in natural gas gathering and processing. But with regard to natural gas pipelines, substantial infrastructure development began before the reforms and will continue, perhaps some of the development aided by the changes to the energy sector, according to ICF’s Peter Nance, a principal with the consultancy. Petroleos Mexicanos (Pemex) and the Comision Federal de Electricidad (CFE) have previously laid out a US$23-38 billion project slate.

“Although the justification for these projects is driven largely by market forces and projected demand growth, the design and implementation of the new sub-laws also could greatly influence outcomes,” Nance wrote in a new ICF white paper. “Indeed, while tremendous growth already is afoot in this sub-sector, a successful restructuring could create an enhanced investment opportunity by accelerating projects, allowing new private sector involvement, and reducing risk and cost of undertaking new projects to meet pent-up demand.”

In the near term as the reforms roll out, there will likely be a bit of uncertainty and confusion for projects already on the books, but they will go forward, Nance told NGI. Beyond 2016, however, it is less clear how things will play out for gas pipeline assets, he said.

Gas pipelines represent the largest slice of the midstream investment opportunity in Mexico, according to ICF. The firm estimates the gas pipeline sector will require investment of US$10-15 billion through 2020.

Gas storage will require another US$3.5-7 billion. “Right now we believe that CFE, through public announcements, has indicated that they would be open to storage to balance the systems and they would be looking to partner with someone on this side of the border to do so,” Nance said. “Given the relative scarcity of storage in Mexico, I think that is a further sign that some of that integration will go forward.”

Natural gas transportation in Mexico has been open to private investment since 1997. However, reform will bring changes to existing gas midstream infrastructure, too. The laws implementing reforms have created a new entity called Cenagas, which is to receive Pemex midstream gas pipeline infrastructure and initiate capacity reservation contracts with Pemex, according to ICF’s analysis.

“The charge for Cenagas is to facilitate third-party open season access for the natural gas assets under its control, and to facilitate open season expressions of interest subject to certification and regulations issued by the Comision Reguladora de Energia (CRE)…

“Our view based on close monitoring of the draft proposals and conversations with principals is that to promote more open competition, pipeline owners — or third parties such as Cenagas — will facilitate market mechanisms for pipeline capacity but not be allowed to participate in marketing the underlying hydrocarbon product. Thus, we anticipate that the existing organizations will (in essence) functionally unbundle, and new marketing companies may arise to bundle pipeline capacity and commodity products.”

The stock price of IEnova, the subsidiary of Sempra that develops, builds and operates energy infrastructure in Mexico, including midstream gas, gas distribution, liquefied natural gas regasification and power generation, is up more than 110% since its March 2013 initial public offering. The company trades on the Mexican Stock Exchange (Bolsa Mexicana de Valores).