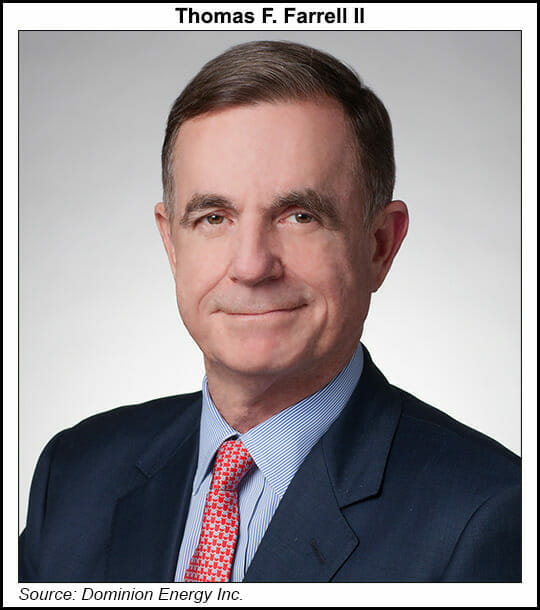 Tom, as he was known to family, friends and employees, was chairman, president and CEO of Dominion from 2007-2020. He had joined the Richmond, VA-based company in 1995 as general counsel after serving in private practice for 15 years.

Farrell was tapped as president and COO of Dominion in 2004. In 2006, he became CEO, and one year later, the board elected him chairman.

Farrell had served as executive chairman until last Thursday, when he retired.

“Tom was a peerless mentor and outstanding leader who sought to find innovative solutions to challenges at Dominion Energy, in the utility industry and in the community he called home,” said CEO Robert M. Blue, who joined Dominion in 2005. “In his tenure at the company, Tom oversaw an era of prosperity and growth, and a long-term transformation that will have a lasting impact on clean energy development and on the health of the environment.

“Above all else, he loved spending time with his wife, his sons and their spouses, and his grandchildren. We will miss him greatly, and extend our deepest condolences to his loving family.”

Farrell “shaped the board in his image — strong and able with a keen eye on ethical behavior, diversity and inclusion, public and community service and innovation,” said lead director Robert H. Spilman Jr., who was elected to the board in 2009. “The Commonwealth of Virginia has lost a kind soul who was abundantly generous to nonprofits supporting the arts and culture, education and critical community needs.”

Since taking over in 2006, Farrell led Dominion’s transformation from relying only on natural gas, coal and nuclear  generation. Farrell was a dealmaker, and he frequently was in the middle of buying and selling assets as strategies or the mood of the country changed.

Despite his illness, Farrell was on the  fourth quarter conference call in February, where he detailed plans to invest $17 billion in zero-carbon generation and energy storage, including regulated offshore wind, solar and nuclear relicensing.

Another $6 billion was earmarked, Farrell said, for electric grid enhancements to ensure the system was more resilient to “cyber and climate threats and more responsive to increasing intermittent generation.” Another $3 billion is budgeted to upgrade the local distribution companies and for renewable natural gas projects.

“Our initiatives extend well beyond our five-year plan,” Farrell said two months ago. “We have identified over $70 billion of green investment opportunity between 2020 and 2035, nearly all of which will qualify for regulated cost of service recovery.”

Blue and Spilman noted that Farrell was proud of the company’s safety accomplishments. The company’s Occupational Safety and Health Administration recordable injury rate, which is the number of reported injuries per 100 employees over a year, fell 78% between 2006 and 2020.

Farrell also helped shape an initiative called Troops to Energy Jobs. “Today, one in five new hires at Dominion Energy served in the Armed Forces, and they make up about 15% of the company’s workforce.”

Dominion during Farrell’s tenure sold off the company’s exploration and production assets, along with interstate natural pipeline, storage and merchant generation businesses. However, operating earnings increased over the period to $3 billion from $1.8 billion, while market capitalization climbed 175%, the company noted.

“Meanwhile, Dominion Energy has built the third-largest solar portfolio among U.S. utility holding companies, according to S&P Global, and cut emissions of carbon dioxide in half and methane by a quarter, and slashed emissions of nitrogen oxides, sulfur dioxide and mercury by well more than 80%.”

Farrell chaired the board of the Edison Electric Institute and the Institute of Nuclear Power Operations. He also was chairman of Altria Group Inc., and served on the AEGIS board.

Among his many community endeavors, Farrell, a devout Catholic, chaired the Colonial Williamsburg Foundation’s board and was on the Board of Visitors at the University of Virginia, where he was rector, and Virginia Commonwealth University.

Farrell also was a member of the board of the Virginia Museum of Fine Arts. In addition, he served on the Council on Foreign Relations independent task force that produced the June 2008 report, “Confronting Climate Change: A Strategy for U.S. Foreign Policy.”

Politics also were part of his realm, as he led the Virginia Governor’s Commission on Higher Education Reform and served as co-chair of the governor’s five-member transition committee. Farrell also was a member of the Governor of Virginia’s Advisory Council on Revenue Estimates; chair of the Virginia Business Council and of the Management Roundtable; and a board member of the Greater Washington Partnership, the Northern Virginia Technology Council and the State Council of Higher Education for Virginia.

“We are just incredibly heartbroken,” said brother-in-law Richard Cullen. “It’s just a tremendous loss, not only to the family, but really to the state of Virginia and beyond.” Farrell “lived to make things better.”

Farrell, whose father was in the U.S. military, was born in Okinawa and grew up in Fairfax County, VA. He received bachelor’s and law degrees from the University of Virginia. Farrell is survived by his wife, Anne Garland Tullidge Farrell; two sons and their spouses, and grandchildren.