Regulation of power station carbon dioxide (CO2) emissions at the federal or state level is a virtual fait accompli, according to Dominion Energy Virginia, whose plans to meet that challenge include more renewable-fueled generation and construction of eight natural gas power plants by 2033. 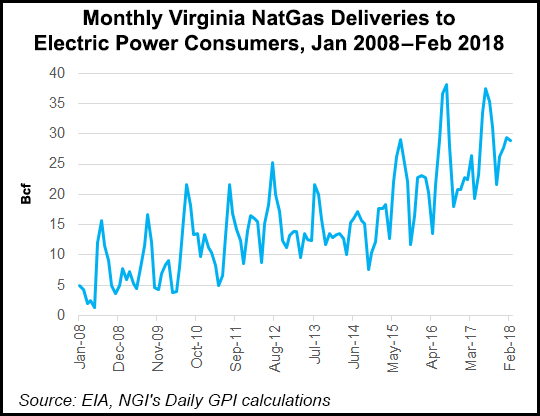 “Specifically, the Virginia Department of Environmental Quality has released a draft proposal capping CO2 emissions from the state’s electric generating units. The draft proposes linking a cap-and-trade program in Virginia with the existing Regional Greenhouse Gas Initiative now being implemented in the northeastern United States. Regardless of the precise mechanism of carbon control, the company is committed to reducing greenhouse gas emissions.”

Such reductions would be achieved by shifting the state’s power generation fuel mix away from coal and toward natural gas and renewables, according to the IRP.

In addition to the 1,585 MW gas-fired Greensville County Power Station, a quintet of alternative plans in the IRP all call for the addition of eight gas-fired facilities using combustion turbine technology with a combined 3,664 MW capacity by 2033.

Other common elements of the five plans include development of 4,720 MW of solar photovoltaic (PV) generation and another 760 MW of non-utility generator solar PV generation, 20-year operating license extensions for four nuclear units at Dominion’s Surry and North Anna power stations, and demand-side management capable of reducing overall customer energy usage by 805 GWh, all by 2033.

The IRP plans also contemplate the potential retirement of 2,785 MW of generation powered by older, less efficient coal, oil and natural gas technology by 2021 or 2022 at six Virginia sites. Dominion previously announced that 1,209 MW of that generation at five sites would be placed in cold reserve by December.