The U.S. Department of Energy (DOE) on Wednesday conditionally authorized Dominion Cove Point LNG LP to export domestically produced liquefied natural gas (LNG) from the Cove Point LNG Terminal in Calvert County, MD, to countries that do not have a free trade agreement (FTA) with the United States. 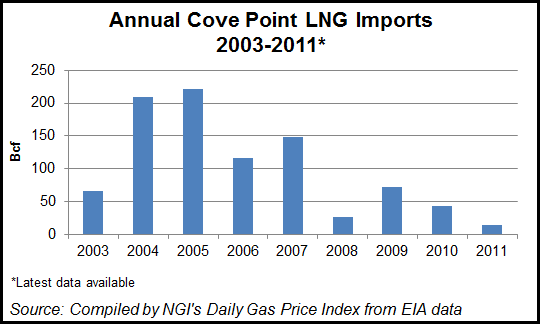 Subject to environmental review and final regulatory approval, the facility is conditionallyauthorized to export at a rate of up to 0.77 Bcf/d for 20 years. This is the fourth such approval issued by DOE and follows the August approval for Lake Charles Exports LLC to export up to 2 Bcf/d (see Daily GPI, Aug. 8). DOE has now authorized up to 6.37 Bcf/d of LNG exports to non-FTA countries.

Thanks to the U.S. shale boom, which has pushed gas prices lower, LNG imports into the Cove Point terminal have dried up in recent years. According to Energy Information Administration (EIA) data, after peaking in 2005 with 221.7 Bcf of LNG imports at the facility, Cove Point took in only 14 Bcf in 2011, the last year for which data is publicly available.

The export project is expected to cost $3.4-3.8 billion, according to the company, which filed its facilities application in March with the Federal Energy Regulatory Commission. Pending receipt of regulatory approval and permits, construction is scheduled to begin in 2014, with an in-service date of 2017.

The existing regasification terminal has connections to the pipeline grid, LNG storage capacity and an updated pier. Construction will chiefly entail adding liquefaction capability. According to Dominion Cove point, the facility will have access to Appalachian gas, including from the Marcellus Shale, as well as gas from the Gulf of Mexico, Midcontinent, Rockies and Canada. Affiliate Dominion Transmission Inc. is said to operate the largest underground gas storage system in the country as well as the Dominion South Point trading hub.

With the volume of non-FTA exports surpassing the 6 Bcf/d mark, the stakes will be getting higher on Capitol Hill, wrote analysts at ClearView Energy Partners LLC in a note Wednesday.

“…[W]e would suggest that as many as three additional projects could win conditional approval before any year-end pause: an extension to the FLEX project (0.4 Bcf/d); Sempra’s Cameron project (1.7 Bcf/d) and Jordan Cove (1.2 Bcf/d) for total approved or conditionally approved volumes of 9.67 Bcf/d.”

“With today’s approval, the United States is now squarely in the range that experts are saying is the most likely level of U.S. natural gas exports,” he said. “If DOE approves exports above that range, the agency has an obligation to use most recent data about U.S. natural gas demand and production and prove to American families and manufacturers that these exports will not have a significant impact on domestic prices, and in turn on energy security, growth and employment.”

DOE said it conducted “an extensive, careful review” of Dominion Cove Point’s application. The department considered the economic, energy security and environmental impacts, as well as public comments for and against the application and nearly 200,000 public comments related to the associated analysis of the cumulative impacts of increased LNG exports. DOE determined that exports from the terminal at a rate of up to 0.77 Bcf/d for a period of 20 years was not inconsistent with the public interest.

However, since then, Energy Secretary Ernest Moniz has said differences in processing may dictate some differences in the schedule. On Wednesday, DOE, perhaps anticipating the unease expressed by Wyden, said it “would continue to monitor any market developments and assess their impact in subsequent public interest determinations as further information becomes available, including the EIA’s ‘Annual Energy Outlook’ at the end of 2013.”