The U.S. oil and gas industry shed more than 160,000 direct jobs in 2020, with nearly half of those losses coming in Texas amid the fallout of the coronavirus pandemic, an annual assessment of the sector shows. 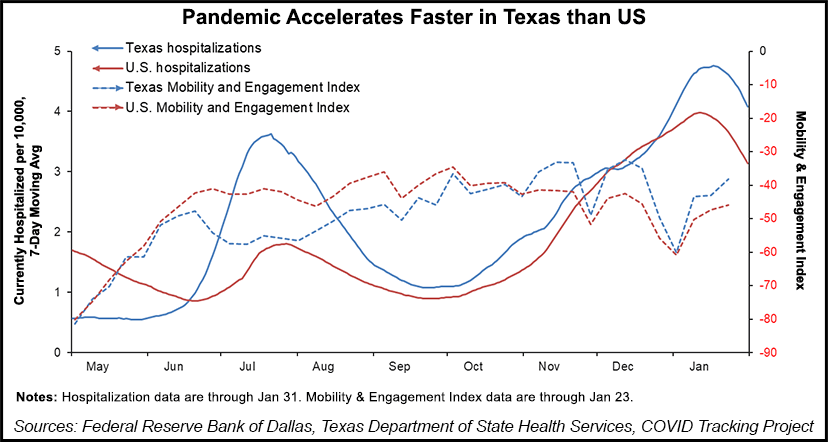 In its State of Energy Report, the Texas Independent Producers & Royalty Owners Association (TIPRO) said the oil and gas industry employed 902,223 workers last year, down 160,323 from a year earlier. In Texas, the nation’s largest state for energy employment, the industry supported a total of 347,529 direct jobs in 2020, down 73,982 from the previous year.

The pandemic jolted the industry in the spring of 2020, when government lockdown orders — imposed to slow the spread of the virus — froze travel and choked off demand for transportation fuels made from oil. Crude prices plummeted last April and producers quickly curtailed output in response. Production declines necessitated spending cuts and layoffs that resulted in the notably smaller workforce.

Enverus forecasted total U.S. average oil production would decline around 690,000 b/d in 2021, as producers maintain lower capital expenditures while the pandemic continues. Production is expected to reach yearly average growth in 2022 at around 200,000 b/d, the firm said.

According to the U.S. Energy Information Administration’s (EIA) latest base case projections, domestic natural gas production would likely recover to pre-pandemic levels by 2023 before continuing to rise through 2050, driven by shale gas and associated gas from oil plays.

Associated gas output fell in 2020 amid oil production declines, but EIA expects output to return to 2019 levels by 2024 “and then steadily increase at a modest rate through 2050” primarily on the strength of output from the Permian Basin.

Despite the challenges of 2020, U.S. payroll in the oil and gas industry totaled $102 billion and economic output totaled $741 billion, or 4% of U.S. gross domestic product, TIPRO said in the annual report. In Texas, oil and gas generated $278 billion of economic output in 2020, or 15% of the state’s economy.

While the Texas economy remains under pressure from the pandemic, a Federal Reserve Bank of Dallas survey released this week showed that business owners, including those in the energy sector, are generally optimistic that vaccines would bring an end to virus outbreaks later this year, opening the door for growth.

“A majority of firms expected business revenues to return to pre-Covid-19 levels by year-end,” the Dallas Fed said. While roughly 60% of all firms reported that their revenues as of January remained below pre-pandemic levels, 30% expected a full recovery within six months and 63% within the year.