U.S. oil inventories spiked during the week ended Dec. 4 as petroleum demand only ticked up slightly and remained below year-earlier levels amid new economic restrictions imposed to slow coronavirus outbreaks, according to the Energy Information Administration (EIA). 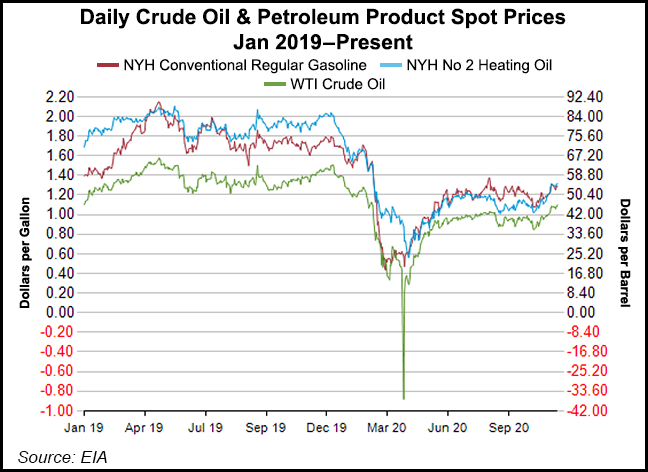 In its Weekly Petroleum Status Report (WPSR), EIA said Wednesday U.S. commercial crude oil inventories, excluding those in the Strategic Petroleum Reserve, increased by 15.2 million bbl from the previous week on robust imports. That followed a draw of 700,000 bbl a week earlier.

“After steady declines since July, total crude and product stocks increased by the highest total since the week ending April 17, due primarily to a high level of crude imports,” analysts at Clearview Energy Partners said. Exports also dropped nearly 50% during the covered week.

Raymond James & Associates said the latest inventories report surprised analysts. The consensus was for a draw of 1.4 million bbl, the firm noted, while historical averages show a normal draw of around 2.2 million bbl for the comparable week.

At 503.2 million bbl, U.S. crude inventories are about 11% above the five-year average for this time of year, EIA said.

Yawger said, however, that neither the surge in oil imports or drop in exports signaled mounting trends, and he expected a pull from crude oil storage with next week’s report. “I will probably be looking for something like a draw of 5 million” bbl, he said.

Total petroleum product demand, meanwhile, increased 0.4% last week after declining nearly 4% a week earlier. On a year/year basis, demand was up 0.9%, marking the first year/year increase since the week ending March 6, according to the Clearview analysts. “That said,” they added, “the comparison week of 2019 had the lowest demand level of that year.”

Drivers of the year/year demand gain were propane/propylene, up 121%, and other oils, up 35%, while jet fuel use was off 17% and gasoline consumption was down 14%.

On a four-week moving average basis, however, demand was down 7.4% year/year.