U.S. crude inventories increased last week as producers boosted supplies and demand only nudged ahead amid lofty fuel prices that kept consumption in check, albeit at solid levels. It marked the second consecutive weekly increase in stockpiles. 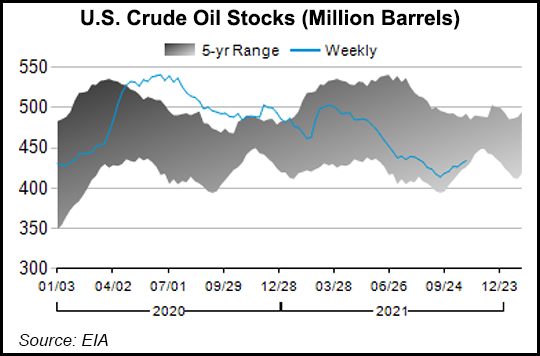 The U.S. Energy Information Administration (EIA) said Wednesday oil inventories for the week ended Oct. 29, excluding those in the Strategic Petroleum Reserve, increased by 3.3 million bbl from the previous week.

Production last week increased to 11.5 million b/d from 11.3 million b/d the week before, EIA reported in its Weekly Petroleum Status Report. Demand, meanwhile, climbed 1% week/week, led higher by increased consumption of jet fuels. Gasoline demand only inched ahead, however, with prices at the pump hovering near 2021 highs, though consumption held well above 2020 levels.

While the weekly demand increase was modest, consumption of fuels derived from oil has proven robust throughout most of 2021, as the United States and economies across Europe and parts of Asia rebound from the 2020 downturn imposed by the coronavirus pandemic.

At the same time, producers in the United States and globally have only cautiously built up output levels this year. This has put upward pressure on oil prices that, by extension, have been passed on to consumers. Both Brent and West Texas Intermediate (WTI) crude prices are up nearly 60% this year.

Global supply shortages of natural gas and coal, too, have added to demand for oil as an alternative heating and power source in some parts of the world, adding to crude supply challenges.

In a report this week, Bank of America (BofA) analysts raised their Brent and WTI price forecasts for next year to $85/bbl and $75, respectively, up from $75 and $71. The analysts expect global demand to prove strong through the first half of 2022 and said Brent prices could peak next year at $120.

While U.S. demand has led the charge, “structural oil demand and supply rigidities are emerging” around the globe, and it could take several more months for producers to balance supply/demand, the BofA analysts said.

In the United States, at 434.1 million bbl, oil inventories are about 6% below the five-year average. Steady declines this year at the Cushing Hub in Oklahoma have kept pressure on U.S. stockpiles. The hub at Cushing is key because it is the delivery point for the WTI futures contract.

The Organization of Petroleum Exporting Countries and its allies, aka OPEC-plus, is slated to meet on Thursday to decide whether to extend a program to revive supplies that the cartel had previously slashed amid the demand crunch of last year.

OPEC-plus agreed in July to raise output by 400,000 b/d monthly. It launched this strategy in August with plans to continue at that pace until it unwinds all of the cuts made amid the pandemic in 2020. The cartel slashed output by 9.7 million b/d last year. Nearly 6 million b/d of that remained offline when Saudi Arabia-led OPEC and its Russia-led partners last met in early October.

OPEC last month said it expected global oil consumption would grow by 5.8 million b/d in 2021 and another 4.2 million b/d next year, reaching an average of about 100 million b/d in 2022. That would put demand on par with 2019 levels, before the pandemic.

Analysts broadly expect the cartel to continue with the 400,000 b/d pace. However, several have noted that U.S. President Biden and his administration in recent weeks have publicly called on OPEC-plus members to increase supplies further to quench the world’s thirst for oil and ease energy price pressures that are contributing to broader inflation concerns. Other major countries, including China, have pressured OPEC-plus to ramp up production further.

“The external flex on OPEC-plus is mounting, especially from the U.S.,” Rystad Energy analyst Louise Dickson said. Oil markets, she said, were waiting Wednesday in anticipation of the next move by OPEC-plus, braced for possible surprises because of the mounting pressure.

That noted, OPEC member Kuwait issued a statement this week saying the cartel should hold close to its 400,000 b/d plan, saying that pace would steadily balance markets over the remainder of this year and early next. Several other members, including Iraq and Algeria, have issued similar statements in recent days.