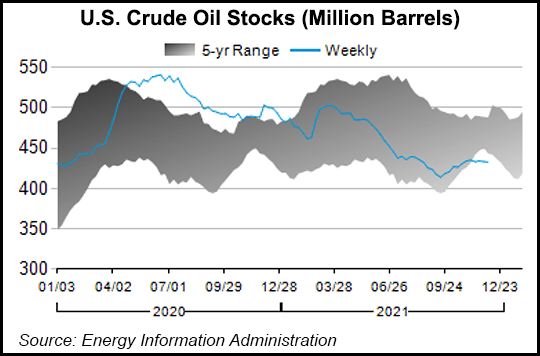 Production was 600,000 b/d ahead of where it was during the first week of December last year, when the industry was in early recovery mode from pandemic-imposed disruption.

Rystad Energy analyst Louise Dickson said producers are responding at a measured pace to higher crude prices and increasing demand as more people are inoculated against the coronavirus.

“Overall, oil products demand sentiment in the U.S. is positive as vaccinations allow the economy to remain open and transport is returning closer to pre-pandemic norms, which has helped refineries increase runs and utilization,” Dickson said.

Demand last week, however, declined 2% from the previous week, led lower by a pullback in jet fuel consumption. Jet fuel demand of just 1.2 million b/d for the Dec. 3 week was the lowest since the week ended June 4 “and could reflect air passenger concerns regarding the Covid-19 Omicron variant,” analysts at ClearView Energy Partners LLC said in a note to clients Wednesday.

The new variant reminded markets that the virus remains a wildcard. Dickson said U.S. producers, while recently more active, are likely to keep output well below pre-pandemic levels into next year as a result. Crude output last week was 1.4 million b/d below the early 2020 peak, prior to the pandemic.

U.S. oil inventories, excluding those in the Strategic Petroleum Reserve (SPR), decreased by 200,000 bbl from the previous week. At 432.9 million bbl, EIA said, inventories were 7% below the five-year average.

EIA said Tuesday, in its separate December Short-Term Energy Outlook (STEO), that it expects the pace of global oil output to exceed demand bumps next year. It noted increased output from the Saudi-led Organization of the Petroleum Exporting Countries (OPEC) and its Russia-led allies known as OPEC-plus, as well as potential virus-imposed demand interruptions.

The cartel said last week that its members would boost production by 400,000 b/d in January, continuing a pace of monthly supply increases launched in August.

EIA said Brent crude prices averaged $81/bbl in November but closed the month at $70. The agency estimated that Brent prices would average $70 in 2022.

“This is a very complicated environment for the entire energy sector,” said EIA Acting Administrator Steve Nalley. “Our forecasts for petroleum and other energy prices, consumption and production could change significantly as we learn more about how responses to the Omicron variant could affect oil demand and the broader economy.”

The STEO also noted that the release of SPR oil reserves by the United States and other countries may have contributed to the decrease in oil prices in late November, and that decline could contribute to lower prices in 2022.

In late November, Biden said his administration would release 50 million bbl of crude from the SPR in a coordinated effort with China, Japan, India and other countries to bolster global supplies.