U.S. producers boosted output back up to the 2022 peak, but domestic demand also accelerated last week and is expected to continue climbing as Americans increase travel during the summer months. 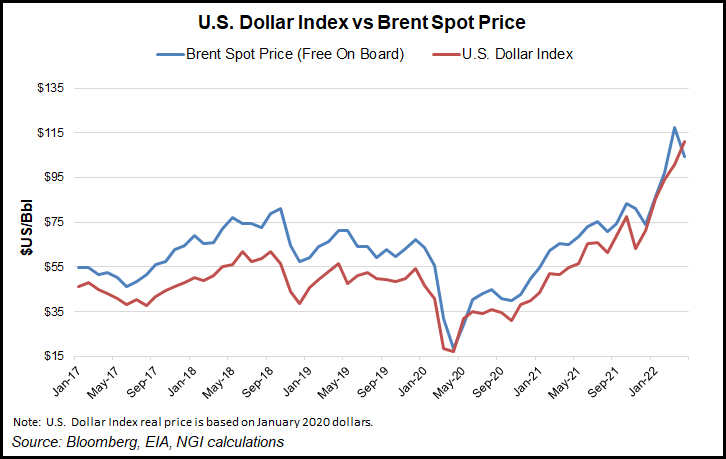 The U.S. Energy Information Administration (EIA) said Wednesday production for the period ended May 13 totaled 11.9 million b/d, up by 100,000 b/d from the prior week. That put output on par with the highs of this year reached in April, according to EIA’s latest Weekly Petroleum Status Report.

Still, production remains more than 1 million b/d below the pre-pandemic high reached in early 2020, while demand is mounting.

Demand had been held in check in recent weeks amid soaring prices at the pump. AAA reported earlier this month that average national gasoline costs reached a record of $4.37/gallon. Diesel and jet fuel costs also have spiked.

But the recent bump in demand, despite the lofty costs, suggests Americans are willing to absorb price pain in order to travel, analysts said. This could pressure modest supplies both domestically and globally.

“High prices don’t seem to be the antidote,” an analyst said on The Desk’s online energy platform Enelyst. “It’s going to be a long, expensive summer.”

West Texas Intermediate crude prices, the U.S. benchmark, hovered above $110/bbl in Wednesday trading – up more than 40% since the start of the year.

Meanwhile, Chinese oil demand is poised to rebound in June following eased restrictions in Shanghai. The country’s largest city, with about 25 million residents, was locked down by government officials much of the spring because of coronavirus flare-ups. This curbed demand for oil during that time.

Chinese refiners trimmed crude processing by 11% in April, according to Reuters estimates.

However, Shanghai authorities said this week that case counts had declined substantially and that most restrictions would be lifted June 1. This could drive a rebound in demand.

OPEC this month estimated that world oil demand in 2022 would increase by 3.4 million b/d year/year, though that marked a downward revision of 300,000 b/d from a prior estimate. Researchers cited the pandemic restrictions in China as a chief culprit. However, they noted, should restrictions ease, demand could bounce back.

The cartel and its allies, collectively known as OPEC-plus, have moved at a measured pace to bring back barrels cut at the height of coronavirus outbreaks. At the same time, Russia, a key member of that consortium, is under heavy pressure amid its invasion of Ukraine.

The United States banned imports of Kremlin-backed oil, and other countries followed suit, pushing more than 1.0 million b/d off the international market. The European Union is pushing its own embargo, a move that could carve another 3.0 million b/d hole in the crude market.

The cumulative effect could be supply/demand imbalance, particularly if both U.S. and Chinese demand mount over the summer.

Russia was the third-largest producer of petroleum and other liquids in 2020, behind the United States and just shy of Saudi Arabia, Mercer Capital analysts said, citing EIA data. Crude prices have fluctuated but remained elevated throughout the war because of supply worries, they noted.

The “high price volatility is the direct reaction from global markets weighing the potential that there may no longer be much Russian oil available,” the Mercer team said.