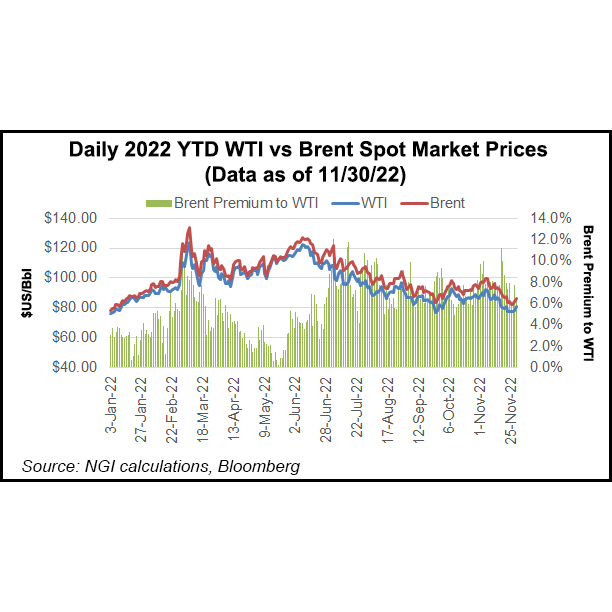 Oil prices pushed higher Wednesday, though gains developed prior to the government data release. Market speculation that OPEC and its allies could further slash production through this year and into 2023 propelled bulls.

Brent crude prices hovered around $85/bbl on Wednesday, up more than 2% intraday. The international benchmark was still off nearly 10% for the month, following an autumn swoon, but it was up about 9% from the start of 2022.

The Energy Information Administration (EIA) said Wednesday production for the week ended Nov. 25 held at 12.1 million b/d – on par with the previous week and the level maintained throughout November.

Output over the month was just 100,000 b/d shy of the 2022 high reached last summer, data from EIA’s latest Weekly Petroleum Status Report showed. But with Brent prices notably below summer highs around $120 and demand relatively soft through the fall, producers have had little in the way of market-driven motivation to accelerate activity.

Overall consumption of petroleum products decreased 1% week/week. Demand had dropped by a similar amount in the week ahead of the holiday, according to EIA. Jet fuel consumption increased along with increased holiday air travel. However, unlike in typical Thanksgiving periods, gasoline and diesel fuel consumption slid lower last week, punctuating demand weakness through the past month.

Total products supplied over the last four-week period averaged 20.5 million b/d, EIA reported, down 1% from the same period in 2021.

“The mood in the oil market has considerably soured since the beginning of” November, said analysts at PVM Oil Associates Ltd.

Even with demand sluggish and production flat, U.S. commercial crude inventories for the Nov. 25 period, excluding those in the Strategic Petroleum Reserve, decreased by 12.6 million bbl from the previous week. At 419.1 million bbl, domestic stocks were about 8% below the five-year average.

Supplies in storage fell as imports declined about 1% in November, while exports jumped 38% from a year earlier. U.S. exports increased as OPEC and others slowed output and as Russian exports to the West eased amid sanctions against the Kremlin because of its war in Ukraine. Further Russian impacts are likely in December, when the European Union’s ban on Kremlin-backed seaborne imports takes effect.

OPEC and its allies, aka OPEC-plus, launched an effort in November to cut up to 2.0 million b/d. The cartel meets on Sunday to address new output targets that could materialize in January. Researchers for the Saudi Arabia-led consortium said in a November report that slowing economic activity in North America and Europe, along with strict coronavirus-related mobility restrictions in China, had curbed global demand and necessitated recent course corrections on output.

Bloomberg polling showed a majority of analysts expect the group of producing countries to hold the line on output, though some anticipate additional OPEC-plus cuts to support prices. ClearView Energy Partners LLC’s analysts count themselves in the latter camp.

The ClearView analysts said in a report Wednesday they are braced for an additional reduction of up to 1.0 million b/d, effective in January. “That said, much supply/demand uncertainty remains,” they added.