U.S. oil stocks increased for a second consecutive week, albeit modestly, despite a bump in demand alongside a recovery in economic activity and ongoing coronavirus vaccine rollouts. 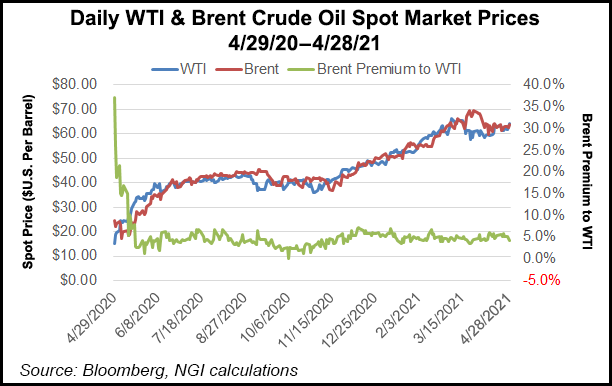 In its Weekly Petroleum Status Report (WPSR), the U.S. Energy Information Administration (EIA) said Wednesday that crude inventories for the week ended April 23 — excluding those in the Strategic Petroleum Reserve — rose by 100,000 bbl week/week. At 493.1 million bbl, U.S. stocks were on par with the five-year average.

The agency reported overall demand increased nearly 9% week/week. Gasoline consumption declined, though the previous week marked the highest total of 2021. Analysts said demand for motor fuels ebbs and flows from one week to the next, but overall, it is recovering notably this year. Demand for other oil-derived fuels increased last week, according to EIA.

Additionally, U.S. refineries operated at 85.4% of capacity last week, up slightly from the prior week and extending a recovery from the disruptions caused by Winter Storm Uri in Texas. Utilization had dropped to 56% in mid-February during the storm.

U.S. crude production for the latest week dipped by 100,000 b/d week/week to 10.9 million b/d, according to the WSPR. Output was more than 2 million b/d below the 2020 peak, reached in early March before the pandemic.

Analysts say the market is on the cusp of a shift. As vaccination campaigns gain momentum and as more virus-related restrictions ease, particularly in Europe, demand for road and jet fuels is expected to increase substantially and could motivate increased production.

“The market expects a major revitalization for global oil demand from this summer onwards, and prices are rising again as we come closer to the beginning of the expected recovery period,” Rystad Energy analyst Bjornar Tonhaugen said Wednesday.

Brent and West Texas Intermediate prices were up in intraday trading Wednesday, holding around their respective high levels since mid-2019.

Meanwhile, the Organization of the Petroleum Exporting Countries and its allies, aka OPEC-plus, canceled a policy meeting Wednesday after a subcommittee of the group on Tuesday recommended forging ahead with a plan to increase production throughout the second quarter.

Saudi Arabia-led OPEC confirmed in a statement that the cartel and its allies would push ahead with previously announced output bumps. OPEC-plus agreed to add, beginning in May, more than 2 million b/d into the market by July amid mounting expectations for global economic growth and a corresponding jump in oil demand this summer and fall.

OPEC recently forecasted crude demand rising by 5.95 million b/d this year. It expects travel to increase and consumption of transportation fuels to ramp up in tandem, though officials this week cautioned about surging coronavirus cases in India, Brazil and Japan.

Separately, the International Energy Agency recently raised its forecast for global oil consumption this year by 230,000 b/d to an increase of 5.7 million b/d.

“We expect a significant rebound in global oil demand in coming months,” Goldman Sachs Group Inc. analysts said in a report Wednesday. “Activity levels as measured by mobility have resumed their upward trajectory, particularly with the vaccination rollout in Europe now gaining momentum. Alongside this resumption in rising activity levels is the seasonal upswing in transportation, manufacturing and construction that begins now and accelerates into June.”

OPEC-plus said its next full ministerial meeting is now scheduled for June 1, when the group will review output levels for July and potentially beyond.