U.S. oil exports averaged 2.9 million b/d through June, an increase of 966,000 b/d from the first half of 2018, and they set a record high monthly average in June at 3.2 million b/d, according to the U.S. Energy Information Administration (EIA). 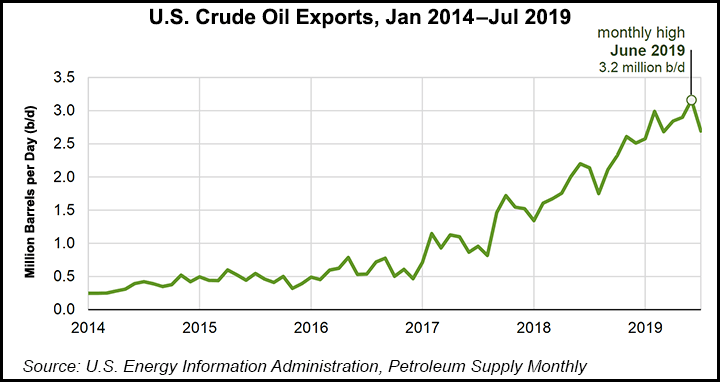 The United States remains one of the world’s largest importers of crude, however, even as Lower 48 operators have increased output.

Canada remained the top destination for U.S. exports, but volumes exported to the country changed little in the first half of 2018 or 2019. By contrast, U.S. crude exports to most other major destinations climbed.

The top regional destination from January through June was the Asia-Oceania region at 1.3 million b/d, with exports to these countries collectively increasing year/year by 472,000 b/d (58%).

Exports to countries including South Korea, India, and Taiwan more than doubled. However, China was an exception, with U.S. crude exports in the first half of 2019 averaging 248,000 b/d, or 64% less than the same period last year.

Barclays Commodities Research noted Thursday that the global oil markets have returned from a “short trip to supply anxiety” following the attacks on Saudi oil facilities last month. The disruption appeared to be short-lived and had no material impact on the country’s exports because of inventories, analysts said.

Oil prices spiked following the attacks, and prices remain in flux beyond 2019, as questions swirled about whether a second-quarter dip in demand was transitory or permanent, according to Raymond James & Associates Inc. The analyst team said Monday “substantially weaker than expected second-quarter global oil demand performance” has led the firm to reduce 2019 estimates. The real question is whether 2Q2019 oil demand weakness was a structural change or transitory.

EIA’s most recent Drilling Productivity Report, which each month reviews oil and gas activity in the seven most prolific Lower 48 plays, forecast oil production overall would increase about 0.8% in October from 8.77 million b/d in September.