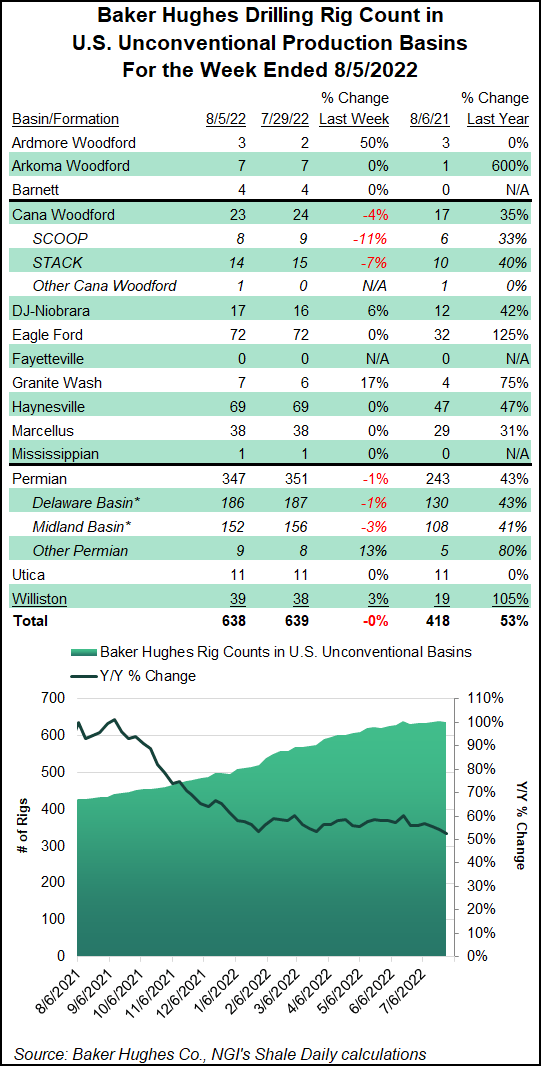 Changes in the United States included a net decline of seven oil-directed rigs, partially offset by a four-rig increase in natural gas-directed drilling. The 764 active rigs as of Friday represents a 273-rig increase year/year, according to the BKR numbers, which are partly based on data from Enverus.

Land drilling was unchanged overall in the United States for the period, while two inland waters rigs and one offshore rig packed up shop. Vertical drilling declined by three units domestically, while directional drilling declined one unit overall; partially offsetting was a one-rig increase in total horizontal rigs.

The Canadian rig count declined one unit to finish the week at 203, according to the BKR data. Changes there included a three-rig increase in oil-directed drilling and a four-rig decline in natural gas-directed activity.

Broken down by major region, the Permian dropped four rigs from its total week/week, falling to 347 rigs overall, up from 243 in the year-earlier period. The Ardmore Woodford, Denver-Julesburg Niobrara, Granite Wash and Williston Basin each added one rig week/week. The Cana Woodford, meanwhile, dropped one rig from its total.

On the other side of the ledger, Colorado and Texas each added two rigs, while North Dakota and Wyoming each added one, the BKR data show.

OPEC-plus, the consortium of global oil producers led by Saudi Arabia in partnership with Russia, agreed on Wednesday to only a modest increase in production next month.