Production of natural gas and its use in the United States both climbed during the first four months of 2015, according to the Energy Information Administration. 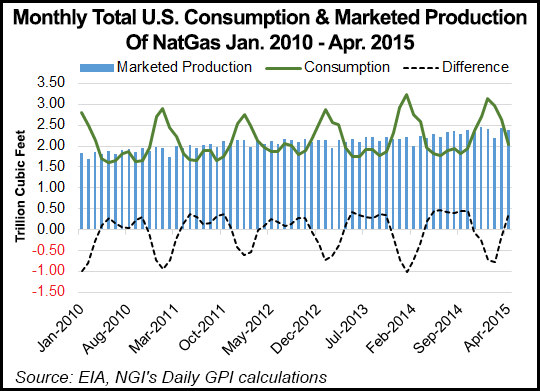 Dry gas production was 2.24 Tcf in April, compared with 2.06 Tcf in April 2014, and the total for the first four months of 2015 was 8.89 Tcf, compared with 8.16 Tcf in the same period last year, according to EIA’s latest Monthly Energy Review (MER), which was released Tuesday.

For the week ended July 17, EIA last week reported natural gas inventories in storage at 2,828 Bcf, 622 Bcf greater than last year and 89 Bcf more than the five-year average (see Daily GPI, July 23). Net storage withdrawals through April were 1.34 Tcf, compared with 1.84 Tcf during the same period last year, according to the MER.

Net imports were nearly unchanged for the reporting period (432 Bcf this year, up just 1 Bcf from last year), EIA said.