Up to a half dozen liquefied natural gas (LNG) production facilities could be built to capitalize on Wyoming gas production while cutting energy costs for operators as well as greenhouse gas emissions, according to a recent report. 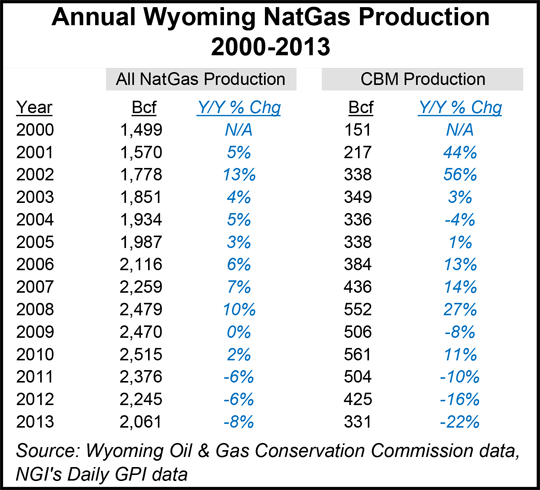 The report was featured in a webinar Thursday hosted by the High Horsepower (HHP) Summit.

The report details how some of the state’s gas supplies turned into LNG can supplement diesel use in mining, rail, drilling, pressure pumping and over-the-road trucking industries. On Thursday HHP Summit creator Gladstein, Neandross & Associates made Leonard available in a webinar to outline the details of a plan for a 10- to 20-year effort to replace diesel with LNG.

Leonard said the buildout of LNG production facilities would include four in the coal-rich Campbell County area in the northeast part of the state, and two more in the southwest corner of Wyoming.

“Wyoming is very unique in that there are many ways in which the state is well positioned to lead in this use of LNG in the [HHP] area,” said Leonard, adding that what has been done in Wyoming is applicable to other resource-rich areas, such as the Gulf of Mexico and the various shale plays around the United States.

While recommending a systematic transformation, Leonard highlighted parts of a plan that are estimated to bring annual savings approaching more than $160 million. “Economics are probably the primary driver for using LNG in Wyoming,” Leonard said.

“LNG is roughly 41% cheaper than using diesel [in HHP applications] on an energy-equivalent basis. These numbers change, but that is the general trend, and this appears to be a long-term trend.”

Leonard claims that the favorable economics are causing “many, many products” in the mining, oil/gas, rail and trucking sectors to be developed related to the use of LNG. “This is not just combustion technologies, but also fuel storage and all the other various things that are needed,” he said.

“There is an abundance of products out there to use LNG and other forms of natural gas in HHP applications.”

Five sectors were examined in the roadmap report: mine-hauling in coal production, railroad shipments of coal and other fossil fuels, oil/natural gas exploration and production (E&P), heavy-duty trucks (for oil, gas and coal sector use), and a catch-all “off-road” category.

Leonard said he and his fellow analysts did a lot of “detective work” to come up with the totals on the diesel fuel use currently in Wyoming’s HHP applications.

In the E&P sector, the report focused on the potential use of LNG for drilling rig and pressure pumping (hydraulic fracturing) operations. Leonard said research determined that 133,000 gallons of diesel is used daily for these oil/gas field functions. About 60% of the fuel use is for pressure pumping/fracking.

BREAKING: U.S. EIA reports an injection of 56 Bcf into natural gas storage for the week ending July 3, slightly below average estimates Profit-taking and skepticism about the outlook for liquefied natural gas snapped a three-day winning streak for natural gas futures Continued spread of the coronavirus and uncertainty about economic activity amplified market doubts…